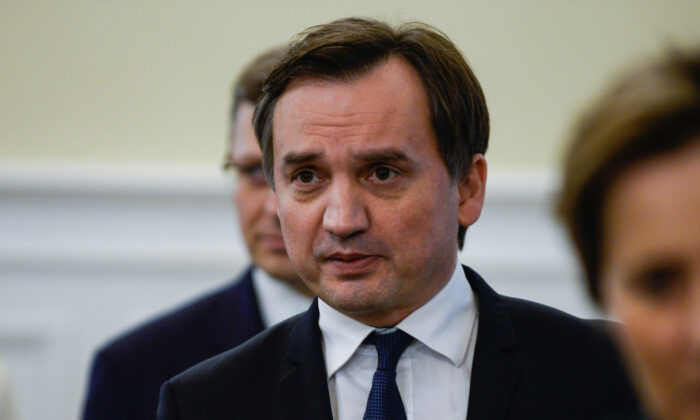 Poland’s minister of justice says the central European nation “must not succumb to lawlessness” and shouldn’t pay any of the daily penalties imposed on the country by the Court of Justice of the European Union (CJEU).

“Whether in the case of unlawful penalties concerning the Turow [coal mine] or in the case of the penalty for changes in the judicial system, Poland cannot and should not pay a single zloty,” he said. The zloty is Poland’s currency.

The CJEU ruled on Oct. 27 that the Polish government has to pay a 1 million euro (about $1.2 million) penalty every day for maintaining a disciplinary chamber for judges, citing the primacy of EU law over national law.

In addition, a 500,000 euro ($580,000) daily fine was imposed on the country last month for ignoring the EU’s injunction to halt operations at the Turow brown coal mine on the Czech border, which the Czech government cited as damaging to its communities. Poland says the mine is a major source of jobs and electricity in the region and vowed to keep it running.

Ziobro called the injunctions lawless. Poland insists the CJEU has no authority over its justice system and has been ignoring its rulings.

The Luxembourg court said in an Oct. 27 statement that the daily fine was “necessary in order to avoid serious and irreparable harm to the legal order of the European Union and to the values on which that Union is founded, in particular, that of the rule of law.”

In early October, the Polish Constitutional Tribunal ruled that some of the EU’s laws conflict with the country’s constitution and that national laws will have supremacy over those of the EU in areas where they clash, a move that was criticized by the EU, prompting a week-long war of words between Poland and the EU.

The EU warned Poland on Oct. 27 it can suspend the payment of COVID-19 pandemic recovery funds to the country if it continues to ignore orders to abolish its disciplinary body.

Ursula von der Leyen, the head of the European Commission, said on Oct. 27 the conditions for maintaining the funds will include closing Poland’s Disciplinary Chamber and adding changes to the way the judges are disciplined, as well as reinstalling some of the suspended judges.

“I think it is doable, I hope that we will reach an agreement,” she said.

Polish Prime Minister Mateusz Morawiecki told the European Parliament on Oct. 19 that officials are working to abolish the disciplinary chamber and replace it with another system before the end of the year, but no detailed plans have been presented yet. It also isn’t clear whether the replacement would be more in line with the EU’s values.