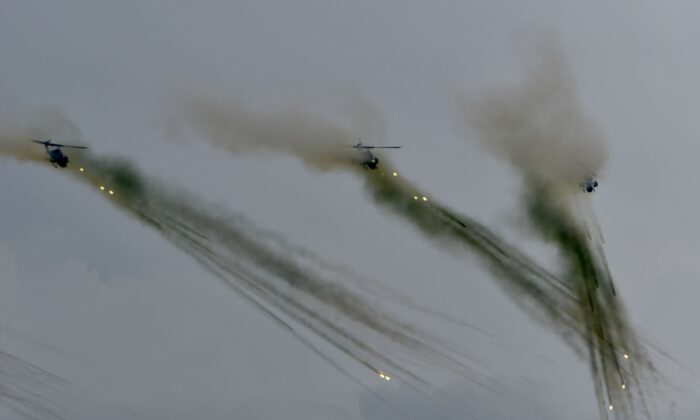 ‘Poison Frogs’: US Urged to Make Taiwan Islands Too ‘Painful’ for China to Seize in Response to War Game Results

The United States would have little recourse if China invaded one of the minor islands controlled by Taiwan, according to a new report by Center for a New American Security (CNAS), a Washington-based think tank.

The report analyzed the results of a virtual war game carried out by the CNAS Gaming Lab that sought to simulate how the United States, Taiwan, and China would behave if China seized Dongsha, a minor island about 190 miles southeast of Hong Kong.

“With few viable coercive options and the onus of escalation falling on the U.S. and Taiwan teams, the game reaffirmed the difficulty of rolling back territorial aggression of this kind,” the report said.

War games are not intended to predict future outcomes, the report said. But they are useful for identifying vulnerabilities and exploring different branches of decision making.

In this instance, the game underscored several potential weaknesses in how the United States is carrying out its competition with China in the Indo-Pacific, and a mismatch in strategies between the United States and its allies in the region.

Ultimately, the report found that U.S. national security strategy focused too much on defending the island of Taiwan itself from a Chinese invasion, rather than seeking to mitigate more limited acts of coercion and aggression in the region.

To solve this problem, the authors of the report recommended turning islands like Dongsha (also known as Pratas Island) into “poison frogs,” a meal too dangerous for China to risk devouring.

Whereas poison frogs telegraph their deadliness with bright colors, the report suggested that the United States and Taiwan should work to make minor islands more militarily formidable and to clearly telegraph to the world what would happen should they be attacked.

“This approach would make Chinese attempts to seize these islands so militarily, economically, and politically painful from the outset that the costs of coercion or aggression would be greater than the benefits,” the report said.

A Chinese invasion of Dongsha and other, smaller Taiwanese islands, is a long-feared scenario. It would effectively grant the Chinese military free navigation of a greater part of the South China Sea and would present logistical and military hurdles to others operating in the region.

The war game sought to explore this problem with a fictional scenario: China used a military exercise as a cover to unexpectedly land a military force on Dongsha, and to seize it from the small Taiwanese garrison stationed there. Following the seizure, China replaced the garrison with one manned by the People’s Armed Police and an allegedly “civilian” force, who then begin converting the island into a military base.

The game was played by three teams with one representing Taiwan, one the United States, and one China and other international actors, who then sought to respond to the situation as best they could. The teams were composed of Taiwanese, American, and regional experts with backgrounds in defense, policy, and other subjects.

Notably, the United States and Taiwan teams failed to communicate effectively due to technical challenges, language barriers, and differing ideas about the nature of the crisis and the response needed.

“As a result, although the Taiwan team wanted to take a deliberate, diplomacy-led approach to regain Dongsha, the U.S. team immediately started planning military options to retake the island,” the report said.

This resulted in a situation in which the U.S. team continuously struggled to compel China to cease its gains.

The U.S. team could not further escalate the situation without risking war, which would alienate its allies, and its soft power was blunted by the fact that Taiwan had immediately opened back-channel communications with the China team.

The China team, meanwhile, was able to avoid escalating the situation because its sole act of aggression in taking the island allowed it to sit still and refuse to cooperate without risking war.

As such, the U.S. team deployed troops to Taiwan and became mired in slow-burning policies aimed at developing regional partnerships and encouraging public-private coordination at home. This ultimately failed to seize the initiative and China retained its gains, undeterred from future hostilities.

“The move to put troops on Taiwanese territory reflected a broader U.S. team bias toward a somewhat symmetrical action-reaction strategy when responding to the China team,” the report said.

“For example, when the Chinese team targeted U.S. satellites, the U.S. team responded by targeting Chinese satellites. This impulse could be interpreted as a means of avoiding escalation, but strategically it tended to cede the initiative to China.”

An integral lesson gleaned from the game was that the United States and Taiwan needed to improve their advance planning for crisis communications and joint responses to Chinese hostilities. Such improvements, the report said, would be necessary to adequately respond to an emerging crisis such as the seizure of Dongsha.

Regardless, the United States would likely be caught on the back foot in such a scenario, the report said, because of the limited effectiveness of available responses.

“Punitive non-military options, such as economic sanctions or information campaigns, took too long to produce effects and appeared too weak to compel China to abandon its gains,” the report said.

“More aggressive military responses risked escalation to war, which both the U.S. and Taiwan teams wished to avoid.”

Given the few credible options for compelling China to give up its gains after the fact, the report said that the United States and Taiwan ought to consider a more effective strategy of deterrence.

It suggested using diplomacy, economics, and military power to make small islands such as Dongsha so dangerous to a potential predator as to ward away any potential hostility. Thus “poison frogs.”

“Indeed, discouraging China from seizing Taiwanese territory before it happens is the most salient lesson of the game,” the report said.