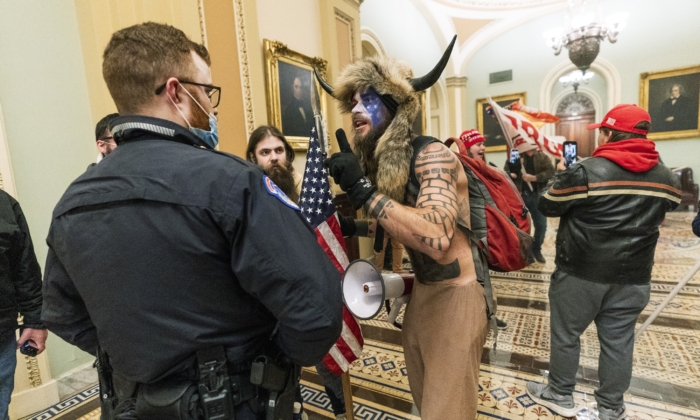 Jacob Chansley, center, and other protesters are seen inside the U.S. Capitol in Washington on Jan. 6, 2021. (Manuel Blace Ceneta/AP Photo)
Crime and Incidents

Plea Deal in the Works for Arizona’s ‘QAnon Shaman’

An attorney for the Capitol-breach suspect known as the “QAnon shaman” said he’s working “in earnest” on a plea deal with prosecutors given his client’s fragile mental health.

“Discussions regarding [Chansley] are being pursued in earnest but there are a lot of moving parts, health concerns, logistics, and cumbersome COVID protocols involved,” St. Louis-based attorney Albert Watkins told The Epoch Times in an email on Monday.

“Health issues being experienced by Mr. Chansley also play a role in undertakings in this regard,” Watkins added.

“There has been a significant shift in the dialog such that the government now acknowledges Mr. Chansley was not a leader or planner of any aspect of Jan. 6 and that he was not violent or destructive in any regard. Collectively these facts have altered the mix.”

Chansley reportedly has spent nearly six months in solitary confinement in a federal prison in Virginia after turning himself in to authorities three days after the Washington protest.

The criminal complaint alleges Chansley “willfully and knowingly entered or remained on the floor of a House of Congress or in any cloakroom or lobby adjacent to that floor, without authorization to do so.”

Chansley, wearing a horned headdress and coyote skins with his bare torso covered in tattoos, was photographed inside the Senate chambers leading a group of protesters in prayer. His self-anointed title “QAnon shaman” stems from his personal belief that satanic pedophiles are running a child sex trafficking ring and conspired against President Donald Trump while in office.

More than 500 protestors have been charged in connection with the Capitol breach, many of whom have remained in custody without bail.

On July 15, the nonprofit Look Ahead America (LAA) and its local branch, Look Ahead Arizona, held a rally in Scottsdale, Arizona, attended by more than 250 conservatives calling for the release of Chansley and other “political prisoners.”

A second LAA rally was held on July 17 in front of the U.S. Department of Justice in Washington, D.C.

“If the prisoners are still being held in deplorable, abusive conditions without charges or without access to reasonable bail commiserate with what they are being charged with by July 17, we will rally at that prison and raise our voices in patriotic song so they know we stand with them,” Braynard said in a statement (pdf) announcing the rally.