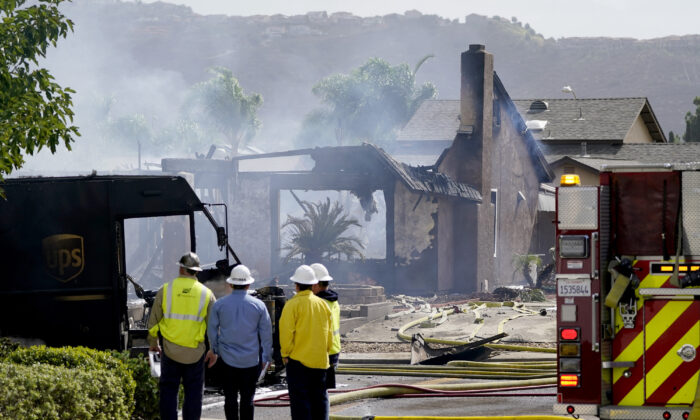 A small plane crashed in a residential neighborhood near San Diego, California, on Monday, killing at least two people, including a UPS driver. At least two others were injured.

Two homes were destroyed after the crash in Santee, a largely residential suburb of 50,000 people. Ten other homes were damaged.

Santee Fire Chief John Garlow told local media outlets that the plane crash caused one home to be totally engulfed in flames. At least two burn victims are believed to have been from the home, Garlow added.

Several vehicles, including a delivery truck, were also torched.

Authorities didn’t identify the delivery truck company or say if anyone was inside, but UPS confirmed one of its workers died.

The federal National Transportation Safety Board was notified and will be handling the investigation, the San Diego County Sheriff’s Office said, adding that several streets were closed due to the incident.

“Please avoid the area near the 9900 block of N. Magnolia Avenue,” the office wrote, adding that “first responders are at the scene of a plane crash. This is a developing situation. We appreciate your patience and cooperation.”

A man at the scene of the crash told the news outlets: “Don’t know the extent of their injuries. I do know from talking to some of the neighbors that it was more bumps and bruises. I think they were lucky they were in the back of the house when it happened because it came in the front. Michael, the neighbor, pulled my mom out of the back window and my stepdad was in the backyard so they broke down the fence to get him out.”

Nearby Santana High School wrote on Twitter that all students were sheltering in place but later rescinded that directive.

The Federal Aviation Administration (FAA) said the plane was a twin-engine Cessna C340, which crashed at around 12:15 p.m. local time.

It wasn’t immediately known where the flight originated or was headed, or how many people were on board. Santee’s deputy fire chief Justin Matsushita said anyone aboard couldn’t have survived.