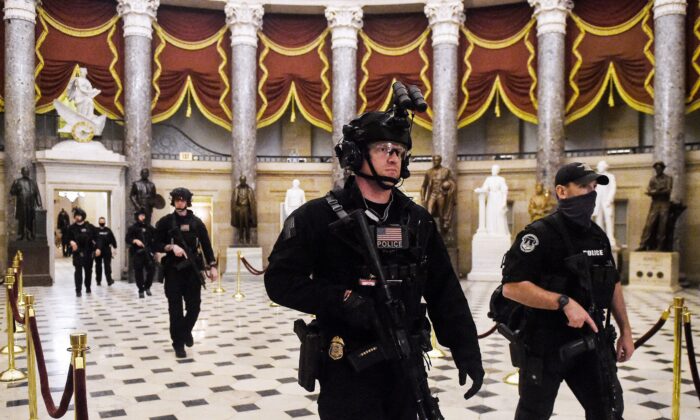 Members of the Swat team patrol and secure the Statuary Hall before Vice President Mike Pence makes his way into the House Chamber, at the US Capitol in Washington on Jan. 7, 2021. (Olivier Douliery/AFP via Getty Images)
US News

Police in Washington D.C. confirmed late on Wednesday that explosives were located near the U.S. Capitol in the midst of protests and as people stormed the complex.

Molotov cocktails were also found in a vehicle on the Capitol grounds, Contee said.

The FBI confirmed that two explosive devices were found.

“Two suspected explosive devices were rendered safe by the FBI and our law enforcement partners. The investigation is ongoing,” the agency told The Epoch Times.

Earlier, the FBI said, “Along with our law enforcement partners, FBI Washington Field Office responded to reports of suspicious devices. The investigation is ongoing … The FBI has been deployed to assist our U.S. Capitol Police partners as requested in protection of federal property and public safety.”

Officials told news outlets that at least four died in the midst of the chaos, including a woman who was shot by a U.S. Capitol Police officer. Officials are now reviewing the matter.

Contee, in the news conference, offered his condolences to the family of the woman who died, Air Force veteran Ashli Babbitt.

Security initially was handled almost entirely alone by the U.S. Capitol Police, a 2,000-member force under the control of Congress and dedicated to protecting the 126-acre Capitol Grounds. For reasons that remained unclear as of early Thursday, other arms of the U.S. federal government’s vast security apparatus did not arrive in force for hours as rioters besieged the seat of Congress.

A U.S. defense official said Washington Mayor Muriel Bowser requested National Guard troops at around 2 p.m. That was about 45 minutes after the protesters had breached the first barricade. Acting Defense Secretary Chris Miller activated the full D.C. National Guard at about 2:30, the official said.

Joe Biggs, a Proud Boys organizer, said more than 65 members of his group attended the protests but that he did not know whether any of them entered the Capitol building. He said he advised other Proud Boys to stay inside and avoid confrontations with police.

D.C. Mayor Muriel Bowser announced a curfew from 6 p.m. Wednesday to 6 a.m. Thursday for the city. Virginia’s Ralph Northam also announced a State of Emergency for the Commonwealth and put Arlington and Alexandria under a curfew.

The Virginia and Maryland National Guards were also called in.