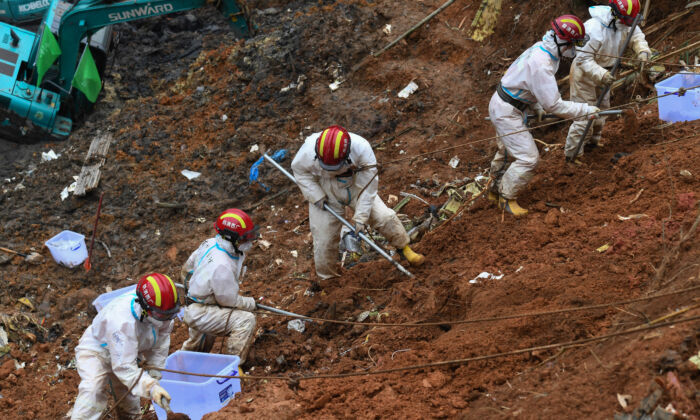 A plane crash in China that is believed to have killed all 132 people onboard has baffled aviation experts as many struggled to explain the Boeing 737’s sudden nosedive into the ground. Given Beijing’s history of non-transparent disclosure, The Epoch Times interviewed a senior Chinese-American pilot with extensive experience flying the Boeing 737, who has given a unique take on the incident.

Gao Fei is a Chinese-American pilot with 26 years of flying experience and has a deep understanding of the culture and management in China’s aviation industry. He has piloted Boeing aircraft in both China and the United States, including the same model as the one that crashed.

Gao expressed major doubts in regards to the flight crew designation and said he does not rule out the hazardous potential of an emotionally distressed first officer, who was possibly demoted from check airman for unknown reasons, an observation based on information released by Chinese authorities.

On March 21, the Civil Aviation Administration of China (CAAC) confirmed a China Eastern Airlines flight MU5735 carrying 132 people crashed in Wuzhou, Guangxi—southeast China. Five days later, on March 26, the Chinese authorities said that all 123 passengers and nine crew members were killed in the crash and that the two “black box” recorders were recovered on March 23 and 27, respectively, but in severely damaged condition.

The so-called black boxes—usually painted orange for visibility—are considered key to determining what caused the crash. The boxes typically contain the cabin voice and flight data, although it wasn’t clear if the damages to the recovered boxes would limit their usefulness.

Flight records revealed the plane plunged more than 26,000 feet in the span of about 95 seconds, according to Flightradar24.

As many aviation experts called the incident odd, former National Transportation Safety Board investigator Benjamin Berman told Bloomberg News that it’s still too soon to make a conclusion on what caused or led to the crash. He said that the 737-800 is designed so that it will normally not dive at such steep angles, saying that it was either caused by a highly unusual malfunction or a serious effort by the plane’s pilot.

According to Gao and several experts, the crashed aircraft was appropriately maintained, and the weather was typical on the day of the incident. Everything appeared normal except for the rank designation of the flight crew, mainly the first officer.

Gao said, according to the culture of the Chinese aviation industry, it is highly unusual for Zhang to still be ranked as a first officer when he has flown over 32,500 hours and worked for the same company his entire life. Furthermore, Yang was a student of Zhang.

A Veteran Pilot Demoted from Captain

In December 2018, CAAC News published an article on Zhang’s career, calling him a 40-year veteran pilot and a mentor to young pilots. According to the article, Zhang is one of the few veteran pilots of China Eastern Yunnan Airlines and has piloted four different types of aircraft.

According to China Eastern Airlines’ official website, Zhang is a “CAAC designated check airman,” one of the highest positions to be given to a pilot. However, all information regarding Zhang has now been removed from the official site.

An old apprentice of Zhang, Li Ming, told the Chinese state-owned Phoenix Weekly that he was shocked and also saddened when he saw Zhang listed as a first officer on the crew manifest. In his eyes, Zhang, who has 40 years of flying experience, is a highly decorated veteran pilot, and many of his old students are now industry leaders.

According to Li’s recollection, Zhang once served as a captain instructor, a squadron captain, as well as a check airman.

“Aside from working for an airlines’ management, the highest position of a pilot could be a CAAC designated check airman. However, somehow Zhang was demoted to a first officer, losing his decorated status and taking a significant hit on his salary,” Gao said, suggesting a potential cause for emotional distress and a safety hazard for the airline.

A former insider in China’s aviation industry told The Epoch Times that Zhang was a senior pilot of the former Yunnan Airlines, which was later forced into a merger with China Eastern Airlines. After the merger, the former employees of Yunnan Airlines, including Zhang, had a highly complex relationship with the upper management of China Eastern Airlines. Their disputes were said to be beyond personal grievances.

Long-term Conflict Between China Eastern Airlines and the Yunnan Branch

According to a 2008 report by the Chinese travel news site TravelDaily, the long-term conflict between China Eastern and Yunnan Airlines began with their government-forced merger in 2002. Yunnan Airlines used to be one of China’s most profitable airline companies, and its pilots were fairly well-treated. However, the pilots have reportedly experienced significant salary cuts and poor treatment after the merger.

“Yunnan Airlines was forcibly merged with China Eastern Airlines [by the Chinese regime]. Merging a profitable company with a loss-making company was unprecedented. This move has caused much dissatisfaction among Yunnan’s original employees,” a former employee of Yunnan Airlines told TravelDaily.

Due to long-term dissatisfaction, from March 31 to April 1, 2008, pilots of the former Yunnan Airlines launched a protest against the newly merged company. Many pilots refused to land at their destinations upon arrival, citing “bad weather,” and flew their planes back to their origins. After 21 flights refused to land, the company punished 13 pilots and grounded one captain. The report did not mention whether the company has improved its treatment of employees after the protest.

Gao said that demoting a decorated pilot without a reasonable cause could seriously affect the pilot’s mental state and pose a safety hazard. Most airlines take their flight crews’ mental health extremely seriously. This sort of demotion is very unusual.

“In the United States, pilots can easily change jobs, but job changes in China are highly restricted and usually coupled with huge fines,” Gao said. “In a free world, with Zhang’s qualifications, any airline will offer him a high salary. But I’m afraid, [in his case], it was difficult for him to escape the job.”

In November 2014, 42 airlines in China signed the “Convention on the Orderly Flow of Airline Pilots,” a pact that stipulates that the outflow rate of pilots from each company should not exceed 1 percent, seriously limiting the pilots from changing jobs. As a result, Chinese pilots who apply for job changes usually have to go through a lengthy litigation process without guarantee of success or are forced to hand back a massive portion of their compensation.

“For a pilot, any emotional distress could pose a safety risk, affecting the pilot’s concentration, reflexes, and reaction speed during the flight,” Gao emphasized.

According to TravelDaily, the Chinese travel news site, the pilots’ emotions significantly impact aviation safety, suggesting that it is part of the airline’s responsibility to monitor the pilots’ mental state and make every effort to ensure flight safety.

Li Jiaxiang, a former director of the Civil Aviation Administration of China (CAAC), also said that pilots have great characteristics such as their attention to detail and calm personality and are always active in thinking. But their professional traits may result in a low tolerance for personal setbacks, thus needing to be closely monitored.

“The pilot’s mental state is an important aspect of the incident investigation. I analyzed it from the perspective of the [flight] crew’s designation. I hope the Chinese authorities can disclose the real investigation results and provide a reasonable explanation instead of [covering up facts],” Gao added.

“So far, there has been no official explanation for Zhang’s demotion or why he was on that flight as a first officer.”

China Eastern Airlines has yet to respond to The Epoch Times’ request for comment at the time of this report.