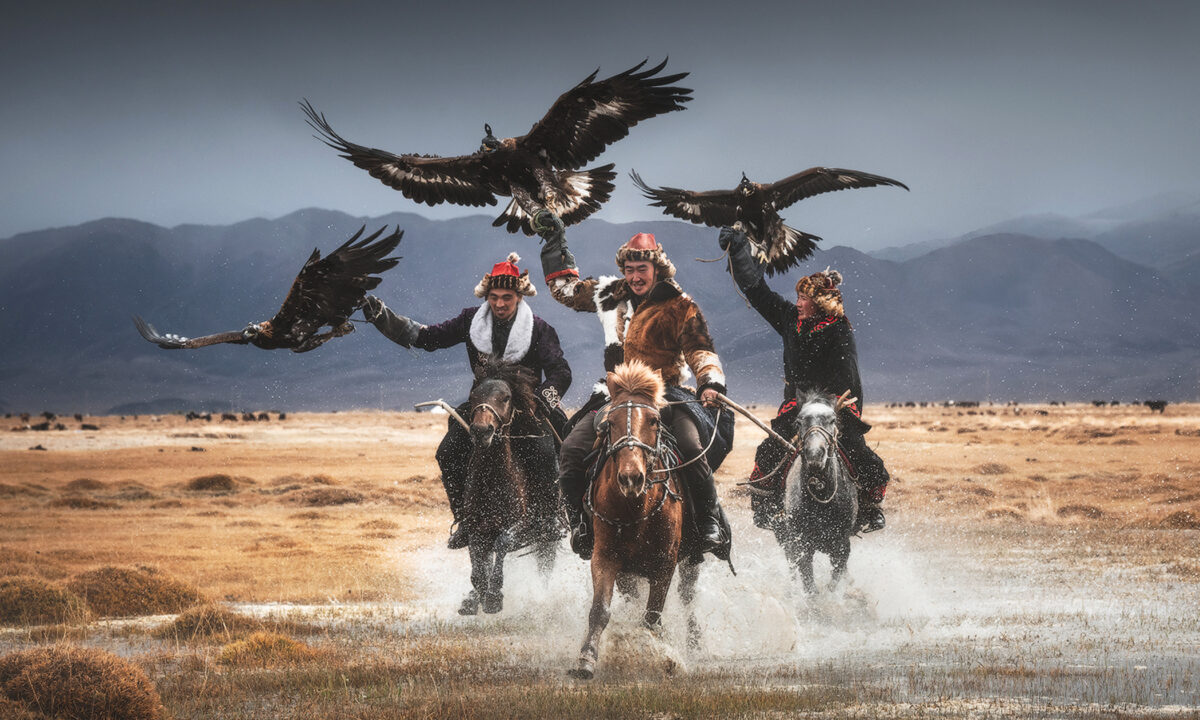 Photos: The Profound Bond Between Mongolia’s Last Eagle Keepers and Their Mighty Birds

Kordan’s work, a breathtaking mixture of epic landscape photography and intimate portraiture, exemplifies the bond between the keepers and their birds—an elusive 1,000-year-old tradition that runs the risk of dying out.

Skilled handlers train young birds of prey—golden eagles are preferred, although they are hard to train—to assist in hunting foxes and hares for meat and fur.

The practice is known to the nomads as berkutchi. Once the domain of the noble classes, berkutchi has become a right of passage for young Mongolian men of the region, reported My Modern Met.

“It’s an elusive culture, almost extinct nowadays,” he added. “But these people try to keep the tradition and pass it on through generations.”

“All nomad families are connected,” the photographer said. After meeting one family, doors opened; a Russian native, Kordan was able to speak easily with the elders who know Russian from Soviet times.

Eagle keepers forge a profound bond with their winged companions, and their lives are inextricably intertwined.

A day in the life of a keeper, said Kordan, begins early with meal preparation; caring for horses, sheep and goat herds; and making furs to fend off the bitter cold. In winter, nomad groups migrate thousands of kilometers across the Gobi Desert to warmer climes, deconstructing and reassembling their ger tents as they go.

“That’s lots of endurance and work,” he told the outlet.

Perhaps most surprising, Kordan said, was his realization that the Mongolian nomads enjoy their lives, despite hardship.

Caring for one bird can last over a decade. These mighty predators are usually released back into the wild when they turn 10 to 12 years old.

“The bond with the bird is so strong!” Kordan said. “Actually, even the eyes and the look of the eagle and its master resemble each other.”

Engrossed by the possibilities of photography since growing up in a beautiful lake region near Moscow, Kordan graduated art school and studied quantum physics before taking up residence behind the lens.

“Nature is my inspiration,” he states on his website.

In venturing to Mongolia and capturing his subjects on film, Kordan’s respect for eagle keeping grew exponentially. Now, the photographer, who leads workshops and expeditions himself, hopes that others will choose to help preserve these unique traditions.

The talented photographer oversees guided tours on camelback and an annual eagle-keeping festival, a smaller event than the nomads’ own berkutchi festival that has come to attract thousands of tourists.

Kordan’s festival is an opportunity for visitors to witness and photograph scenic displays of Mongolian falconry for themselves.

“I’m very happy that I can support nomadic culture in this way,” he told My Modern Met. “We need to respect our ancestors, and continuing to preserve traditional culture definitely makes our lives better and filled with purpose.”