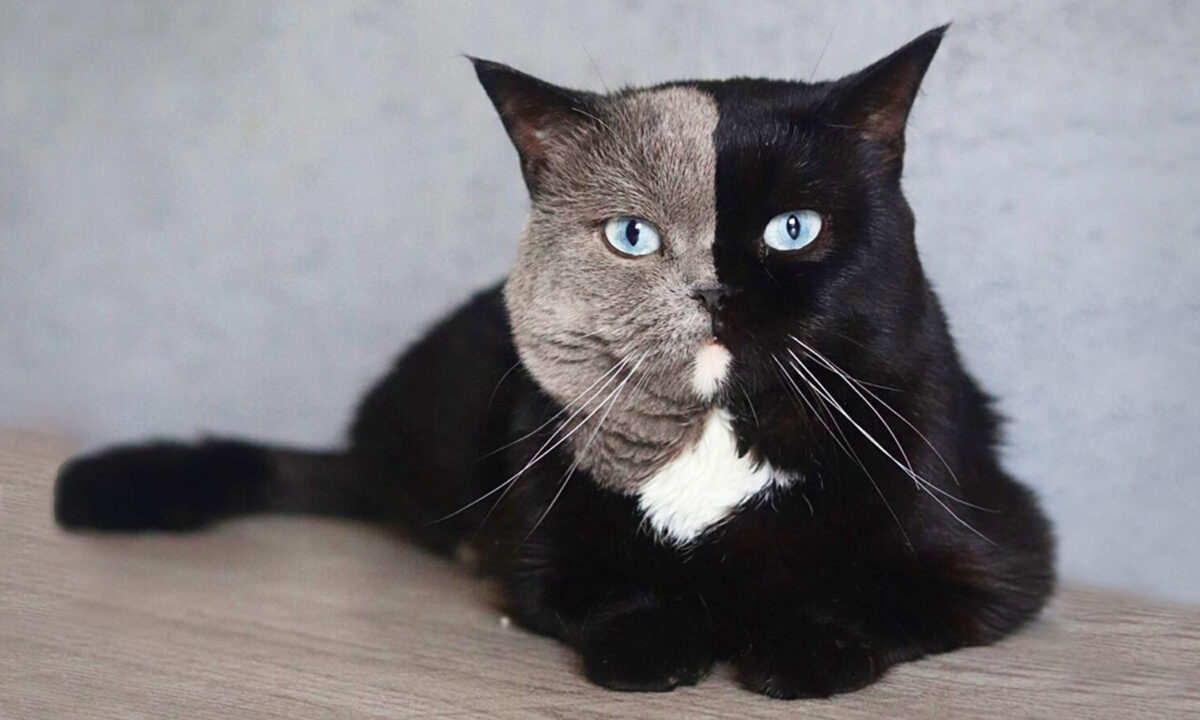 PHOTOS: Rare Cat With ‘Two-Faced’ Coloration Will Steal Your Heart—’He Is so Unique’

A kitten born with a rare, two-toned face has grown up into a sweet and social cat, a bonafide cuddle-bug, and has taken the internet by storm with his own social media page.

Split down the middle, one side black and the other gray, kitten Narnia’s little face shocked his owner, pedigree cat breeder Stephanie Jimenez, as soon as she saw him.

“I was very surprised; he is exceptional,” Jimenez, 36, told The Epoch Times. “It’s possible he’s a chimera, so that two embryos in his mother’s womb merged. A geneticist is performing new tests on Narnia to better understand it … we hope that one day we will have a correct answer!”

Jimenez, a mom of five who lives near Paris, France, has bred pedigree cats for nine years; she also has nine additional cats, a chihuahua named Aslan, and a rabbit named Peluche.

Narnia—a now 5-year-old British shorthair mix with piercing blue eyes—was born at home in March 2017 and became part of the family. As his kitten fluff grew into sleek adult fur, so the divide between the black and gray on his face sharpened, and his rare look enchanted netizens everywhere.

“Narnia and I have a very close relationship,” she said. “He loves me and I love him, infinitely.”

The proud owner created an Instagram page for Narnia to show the world his unique beauty. Jimenez did not expect Narnia to become famous; his page has over 279,000 followers to date.

“When people discover Narnia there are two possible reactions,” she shared. “The first: ‘He’s the most beautiful cat I’ve seen, he’s amazing!’ The second: ‘It’s not a real cat, it’s not possible. The photo or video is faked.'”

But while unusual, Narnia’s two-faced feature is as real as his warm personality and his clever cat brain.

“He knows how to open doors!” said Jimenez. “He loves hugs, he purrs all the time, he loves to sleep, play, and eat … and, he likes to pose for pictures.”