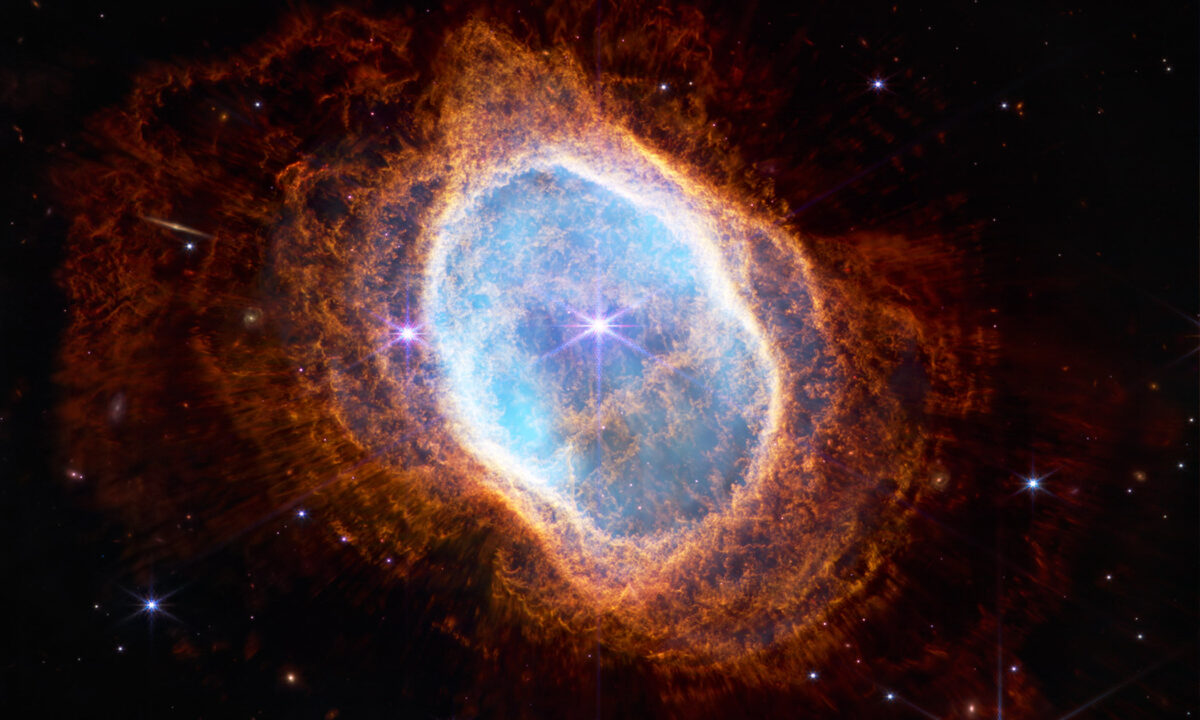 NASA just kicked off the “dawn of a new era in astronomy” this week releasing the first full-color images and spectroscopic data from its new James Webb Space Telescope.

It’s the “largest and most powerful space telescope” the world has ever seen, the space agency stated.

Dazzling shots display previously unseen reaches of space, near and far, and “tell the story of the hidden universe” — from neighboring exoplanets just beyond our solar system to the most distant galaxies observable in the early universe. They demonstrate, said NASA, “Webb at its full power, ready to begin its mission to unfold the infrared universe.”

Here’s a peek at what the future of astronomy has in store.

Foremost featured are the “cosmic cliffs,” also known as the Carina Nebula (or NGC 3324), located roughly 7,600 light-years away.

They appear like moonlit, craggy mountains and valleys, but are actually a nursery of newborn stars, whose intense ultraviolet radiation and stellar winds carved out a gaseous cavity from interstellar space dust.

What look like mountain peaks are about seven light-years high, according to NASA. These hot, bright young stars were previously unobservable, until now.

Such star-forming regions as NGC 3324 have a relatively short shelf life, lasting between 50,000 to 100,000 years, making them difficult to capture. But Webb’s extreme sensitivity and exquisite spatial resolution managed to chronicle the rare event.

This shot of galaxy cluster SMACS 0723 captures thousands of galaxies within an extremely small field of view — one approximately the size of a grain of sand held at arm’s length.

The combining of Webb’s high-resolution imagers and a natural effect called “gravitational lensing” made this near-infrared image possible.

This cluster is bound together by gravitational forces. In its center are bright white elliptical galaxies, whose gravitational effects stretch, warp, and even mirror more distant galaxies, which appear as orange arcs further beyond.

These images demonstrate the deep field capabilities of the Webb Space Telescope, but just scratch the surface of what it can actually do.

They represent the “clearest, most detailed views of star clusters in the early universe so far,” according to Webb Space Telescope.

Webb also observed a “hot, puffy” exoplanet — a planet outside our solar system — transiting (passing in front of) WASP-96, a star within the Milky Way.

A total of 280 individual brightness measurements were taken over the course of 6 hours and 23 minutes, before, during, and after the transit.

Starlight passing through the planet’s atmosphere enabled scientists to observe haze and clouds, indicating there is water there.

This exoplanet, WASP-96b, is believed to be a hot, gas giant with an atmospheric temperature of about 1,350 degrees Fahrenheit (725 degrees Celsius), orbiting a sun-like star roughly 1,150 light-years away in the constellation Phoenix.

WASP-96b orbits extremely close to its star — less than 1/20th the distance between Earth and the sun — completing one revolution in less than 3.5 Earth-days.

The data from WASP-96b mark the beginning of a journey for Webb to explore hundreds more systems and discover what other planetary atmospheres are made of.

The Southern Ring Nebula was also captured by Webb using its near-infrared and mid-infrared imagers.

The telescope revealed a white dwarf star (the remnants of a star like our sun after shedding its outer layers) that had ejected multiple shells of material around it, forming a ring-shaped nebula distorted by gravitational forces.

The white dwarf had to repeatedly contract, heat up, and emit material — somewhat like a rotating sprinkler adding the ingredients needed — for thousands of years to form its present state.

Able to pierce through the surrounding dust of one galaxy, Webb’s imagers revealed the composition of the gas near its supermassive black hole center.

Together, these images and data revealed the capabilities of all four of Webb’s state-of-the-art scientific instruments.

All told, scientists were stunned and elated.

“Today, we present humanity with a groundbreaking new view of the cosmos from the James Webb Space Telescope — a view the world has never seen before,” said NASA administrator Bill Nelson. “These images, including the deepest infrared view of our universe that has ever been taken, show us how Webb will help to uncover the answers to questions we don’t even yet know to ask; questions that will help us better understand our universe and humanity’s place within it.

“The Webb team’s incredible success is a reflection of what NASA does best. We take dreams and turn them into reality for the benefit of humanity. I can’t wait to see the discoveries that we uncover — the team is just getting started!”

On Tuesday, July 12, the images were displayed on several digital screens in Times Square in New York and in London’s Piccadilly Circus.

The James Webb Telescope was launched on Dec. 25, 2021, on an Ariane 5 rocket from a spaceport in French Guiana.

After undergoing a complex sequence of deployment in space, Webb then underwent months commissioning, aligning mirrors, and calibrating instruments to suit its space environment, readying the telescope for science.

“Absolutely thrilling!” said John Mather, Webb senior project scientist at NASA’s Goddard Space Flight Center in Greenbelt, Maryland. “The equipment is working perfectly, and nature is full of surprising beauty. Congratulations and thanks to our worldwide teams that made it possible.”

The new space telescope aims to unravel mysteries within our solar system and beyond into more distant worlds, to probe unknown structures and the origins of our universe.