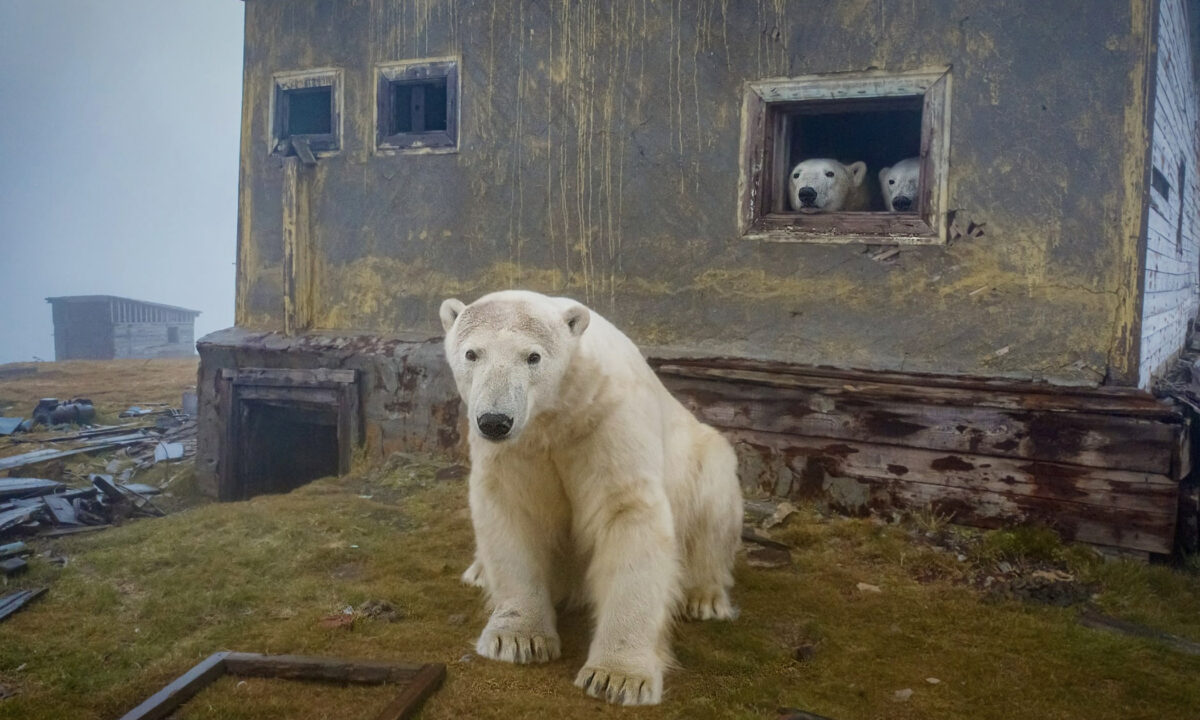 This sleuth of spooky bears might have gone unnoticed on Kolyuchin Island had David Kokh, a 41-year-old Moscow-based photographer, not set sail on his long-awaited voyage to Wrangel Island last September. He shared how the remarkable encounter, and subsequent photoshoot of a lifetime, transpired.

“We sailed along the coast and covered more than 1,200 miles of untouched landscapes, villages lost in time, spots with various fauna, and seas full of life,” Kokh told The Epoch Times. “One day, bad weather was expected, so our captain approached a small island, Kolyuchin, to take shelter from the storm.”

That Arctic island, located off Russia’s northeastern coast, northwest of the Bering Strait between Alaska and Russia, is known for its polar weather station that operated during Soviet times, the photographer said. It was finally closed in 1992, but an abandoned village still stands on the island today.

Kokh described feeling a “childlike sense of excitement” upon discovering the family of polar bears huddled amidst the dismal, depressing dwellings. “The stormy wind, rain, and neglected buildings on the rocky shores all made everything appear super surreal,” he said. “Suddenly, we noticed movement in the windows of the houses. Someone took out some binoculars and we saw the heads of polar bears!”

The bears appeared like wraiths amidst eerie fog on the long-deserted island. “It was the perfect setting,” he added.

Kokh was able to capture the wildlife on camera without disturbing them or exposing himself to danger by using his Mavic 2 Pro drone camera. The drone was equipped with low-noise propellers so as to not startle the enormous bears. He employed clever tricks and maneuvers with his drone to minimize the disturbance. “I was nowhere near them so was not in any danger,” he said.

There were polar bears standing guard like sentinels; peering through windows, alone or in pairs; loitering on porches; and lounging on the lawns outside—making for a wildlife shoot of a lifetime. “The bears walked around the houses, there was about twenty animals in sight at the same time, mostly males,” Kokh said. “The females kept to the side with their cubs, closer to the shores of the island.”

Besides the thrill of the encounter and satisfaction of capturing a rare and unique moment, Kokh was able to share the polar bear photoshoot with the world on his Instagram, where it went viral. “The moment when I encountered the polar bears at the abandoned meteorological station in the Northern Chukotka was very special for me, pretty sure I will never forget it,” he said. “I’m incredibly grateful I can share this moment with people from all around the world.”

Kokh believes that a photographer’s job is to “tell a story”—His story, he adds, is one of the relationship between ourselves, wildlife, and nature.