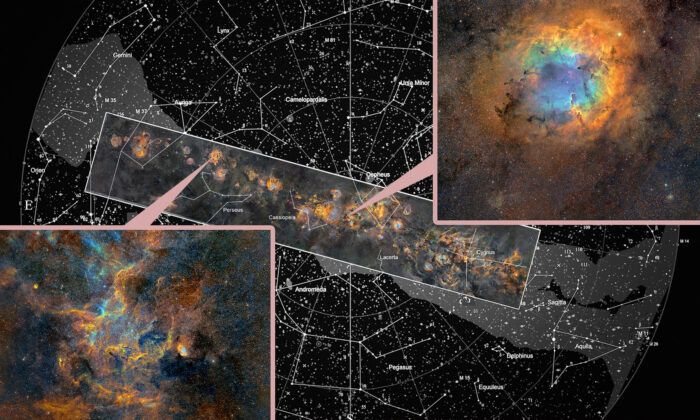 An opalescent pendant, the Milky Way cuts a colossal path through the night sky. It is the nebula of our galaxy that has inspired a sense of awe and mystery in humankind throughout history.

It was this sense of wonderment that photographer JP Metsavainio hoped to capture with an extreme long-exposure composite image of the Milky Way.

But he didn’t want just any picture of the galaxy overhead.

The photographer was aiming for something extraordinary.

It took Metsavainio 1,250 hours of exposure and nearly 12 years, as reported on his website, to map out in high resolution a vast celestial panorama.

The end result seems to capture some of that glorious wonder.

“I can hear music in this composition,” Metsavainio said of his work, “from the high sounds of sparcs and bubbles at left all the way [to] deep and massive sounds at right.”

The vast mosaic was captured with Metsavainio’s hodgepodge telescope camera setup (consisting of a custom Apogee Alta U16 and Tokina AT-x 300mm f2.8 camera lens combo), which he has lovingly dubbed “Frankenstein’s Monster,” among other configurations over the years.

Metsavainio explained that the final composite image, which encompasses 20 million stars and 125 x 122 degrees of the Milky Way, took so long to compose due to its size.

The final mosaic consists of 234 individual images and is roughly 100,000 pixels wide.

The photographer says he used PhotoShop to piece together the mosaic with very little tweaking, using stars as markers to assemble the frames.

With this incredible process, Metsavainio captured an image of unfathomable richness and depth.

The mosaic displays a Milky Way that is full of rainbow clouds, every inch a window into worlds never before seen in such color by mankind.

“I think this is [the] first image ever showing the Milky Way in this resolution and depth at all three color channels (H-a, S-II, and O-III),” Metsavainio said.