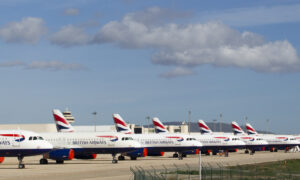 A worker at a U.K. charity that helps people with a learning disability was suspended for allegedly placing bags on an elderly man in a wheelchair while she smoked a cigarette.

A picture of the incident went viral on Facebook.

Mencap, the disability charity, said it was appalled by the image, which shows a female cater smoking and talking on her phone while bags were piled on the man. His face was obscured.

I don’t think she should work with vulnerable people.
— Charlotte Shaw, the photographer

The picture was posted on Mencap’s Facebook page by Charlotte Shaw, who said she was concerned, reported The Guardian.

“One of your staff in the Leicestershire area smoking whilst on the phone in Leicester shoving all her shopping bags on top of him with no care in the world,” Shaw wrote. “I don’t think she should work with vulnerable people,” she added.

The image was shared more than 10,000 times this week, with users expressing their shock and disgust.

One Facebook user wrote: “As a carer myself I find this disgusting and heart breaking, too many vulnerable people are being neglected and it’s not acceptable.”

Another added: “This is so vile as a carer myself this gives other carers a bad name! Never would I ever put a vulnerable person I work with in this situation. Absolutely disgusting, name and shame her.”

According to The Telegraph, Mencap responded to the image, saying they suspended the worker.

“We are appalled by what is happening in the picture. After seeing it we immediately took action, and have suspended the support worker in question and reported the issue to the relevant local authority safeguarding team,” Steve Baker, Regional Director of Services at Mencap, told the paper.

“We take the wellbeing of the people we support extremely seriously, and we expect and train our staff to deliver high quality care and support services. What we see here would fall well below that standard. Our priority now, as always, is ensuring that we offer the highest quality of care to our beneficiaries so they live the lives they choose.”