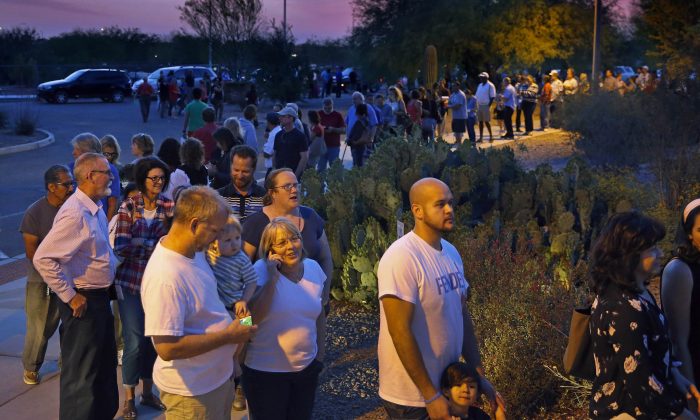 People wait in line to vote in the primary at the Environmental Education Center, Tuesday, March 22, 2016, in Chandler, Ariz. Residents in metro Phoenix have been bristling for years over a perception that state leaders want to make it harder for them to vote, and the mess at the polls Tuesday only heightened the frustration. (David Kadlubowski/The Arizona Republic via AP) MARICOPA COUNTY OUT; MAGS OUT; NO SALES; MANDATORY CREDIT
2016 race

Writes letter to the Attorney General.
By Steven Klett

Phoenix Mayor Greg Stanton has called for a full investigation of alleged voter suppression after voters had to stand in line for up to 5 hours during the Arizona primary March 22.

“Throughout the county, but especially in Phoenix, thousands of citizens waited in line for three, four, and even five hours to vote,” Stanton wrote in a letter to Attorney General Loretta Lynch.

This is unacceptable anywhere in the United States, and I am angry that County election officials allowed it to happen in my state.
— Greg Stanton, Mayor of Phoenix

“Many more simply could not afford to wait that long, and went home. This is unacceptable anywhere in the United States, and I am angry that County election officials allowed it to happen in my state,” he continued.

One factor that contributed to the long lines is that Arizona dramatically reduced its voting precincts since the 2012 election.

In Pheonix’s Maricopa County, voting precincts went from 200 in 2012 to 60 this year. This county had only one polling site for every 21,000 voters, affecting areas of the state with denser Latino and African-American populations.

The Governor of Arizona Doug Ducey said that it was “unacceptable that many [voters] had to battle incredibly long lines” and also pointed to another issue in the Democratic primary: independent voters.

Registered independent voters were not allowed to vote in the Democratic primary because it was a “closed” primary meaning only registered Democrats could vote. As a result, one of the largest voting blocs in the state was turned away at the voting booth.

“That means allowing independents to vote in presidential primaries, just as they vote in all other Arizona primaries,” he said. “A big part of yesterday’s problem was registered voters showing up, and being told they couldn’t vote. That’s just wrong. If people want to take the time to vote they should be able to, and their vote should be counted.”

People in the United States of America should not have to wait five hours in order to vote.
— Bernie Sanders

Bernie Sanders, who has been an Independent for most of his political career, called the long lines at the primary a “disgrace” and applauded Mayor Stanton’s call for an investigation.

“People in the United States of America should not have to wait five hours in order to vote. We do not know how many thousands of people who wanted to vote yesterday in Arizona did not vote,” Sanders said in a San Diego press conference.

Hillary Clinton’s campaign counselor Marc Elias took to Reddit and pointed out that none of the parties have any control over the election, and that all the campaigns were affected:

“Neither the Clinton campaign nor the Sanders campaign—nor for that matter the Trump campaign—have anything to do with them, beyond being on the ballot,” Elias said, “and the county with the biggest issues last night—Maricopa—is run almost entirely by Republicans.”

Clinton won the Democratic primary in Arizona 57 percent to 39 percent.