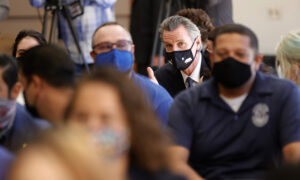 A dust storm warning was issued for the greater Phoenix area on Monday evening, according to reports.

The warning was issued at about 6:30 p.m. local time. It lasts until 7 p.m. MST, the National Weather Service says.

The NWS said visibility will be at 1/4 due to blowing dust. “Impacts: A sudden reduction in visibility could be hazardous to drivers, especially when speeding,” it says.

“Be ready for a sudden drop in visibility to near zero. If you encounter blowing dust or blowing sand on the roadway or see it approaching, pull off the road as far as possible and put your vehicle in park. Turn the lights all the way off and keep your foot off the brake pedal,” the agency said, adding: “Remember, pull aside, stay alive.”

AP weather update: Monsoon storm causes power outages in Tucson
TUCSON, Ariz. (AP) — Some power outages are reported in the Tucson area after a monsoon storm dropped up to 1 ½ inches of rain on parts of the city.

Tucson Electric Power crews are working to restore power to more than 100 customers.

Power was restored earlier Monday to more than 1,600 customers near the University of Arizona area after storm-damaged equipment was repaired.

Flash flooding is reported in some streets in Nogales and portions of southeast Tucson.

The Santa Cruz River reportedly is running high and the Nogales wash is overflowing into many streets.

National Weather Service meteorologists say the storm is moving north and could hit parts of the Phoenix metropolitan area by late Monday afternoon.

Arizona’s monsoon season begins every year in mid-June and runs through the end of September.