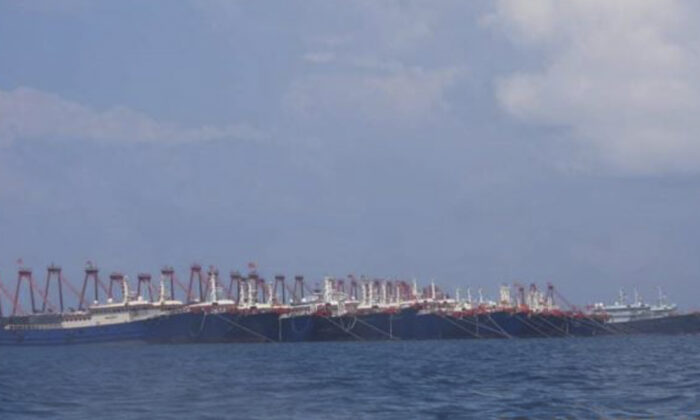 The Philippine government has issued a diplomatic protest against the frequent disruptive actions of Chinese vessels challenging its ships patrolling the South China Sea.

The Filipino Department of Foreign Affairs (DFA) said that the protest was against the “unlawful issuance of over 200 radio challenges, sounding of sirens, and blowing of horns by Chinese government vessels.”

These provocative actions, announced by the ministry on Oct. 20, were conducted against Philippine authorities who were on their routine patrols in the region. The timing was not specified.

Conflicts in the South China Sea have been happening for years with Manila and Beijing, along with neighboring countries, claiming territories and maritime zones. According to the Philippine foreign ministry, the patrols were “legitimate, customary, and routine,” and Beijing’s actions threatened to undermine the existing order in the region.

Based on China’s so-called “nine-dash line,” the communist regime claims vast swathes of the South China Sea, including islands. But this is disputed by almost all countries sharing the surrounding coastline, including Malaysia, Brunei, the Philippines, Vietnam, and Taiwan.

According to tracking done by the U.S.-based Asia Maritime Transparency Initiative of the Center for Strategic and International Studies (AMTI CSIS), the Philippines has increased the frequency of maritime patrolling in the South China Sea during recent months. But there are a significantly greater number of Chinese vessels that move through and survey the region.

Besides this latest incursion, there have been 78 protests filed under President Rodrigo Duterte’s administration as of April 2021. The issues have mainly been raised for infractions in the West Philippine Sea, which is the official name given by the Philippine government for the eastern parts of the South China Sea that come under the country’s economic zone.

Duterte has been called out by critics for not standing firmly against China and for favoring warmer relationships with Beijing.

Back in March, the Philippine Coast Guard (PCG) reported more than 200 Chinese militia ships in the vicinity of the Whitsun Reef, located in the northeast of the Union Banks in the hotly-disputed Spratly Islands. This prompted the DFA to issue daily protests until the Chinese vessels cleared the area.

“The Philippines’ increased patrol efforts send a message that Manila is determined to assert its rights. But they pale in comparison to China’s near-permanent coastguard and militia presence throughout the South China Sea,” AMTI CSIS said in a report.

Beijing’s claims in the South China Sea were dealt a blow in 2016 when The Hague tribunal invalidated China’s “historic rights within the nine-dash line.”