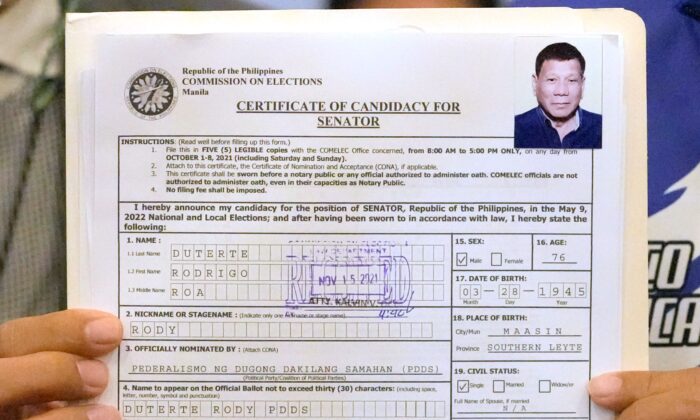 A representative of Philippine President Rodrigo Duterte holds his Certificate of Candidacy for Senator at the Commission on Elections in Manila, Philippines, on Nov. 15, 2021. (Aaron Favila/AP Photo)
Asia & Pacific

MANILA—Philippine President Rodrigo Duterte backed away from political retirement on Monday to launch a late bid for a senate seat, avoiding a clash with his own daughter for the vice-presidency just hours before a 2022 election deadline.

Despite last-ditch efforts by supporters to convince her to succeed her father, Sara Duterte-Carpio is set to contest the vice presidency and her father a seat in the senate, two of the most powerful posts in a country where they have built considerable political clout in the past six years.

Duterte had said last month he would quit politics after leaving the presidency and voters were kept guessing over both his and his daughter’s intentions right up until Monday’s deadline for changing candidates.

With their decisions made, the spotlight for the presidency could shift to the son and namesake of the late president Ferdinand Marcos.

“This seals Marcos’s position as the frontrunner in this race,” said Richard Heydarian, an author, columnist, and academic who specializes in politics.

“With Sara not in the race, then this race becomes all about beating Marcos”.

Duterte-Carpio, 43, had been tipped to run for president after leading all opinion polls this year in preferred candidates. Marcos has said he wants her to be his running mate, which could give his candidacy a significant boost.

Analysts had suggested the Duterte family might seek prominent posts to prevent a political vendetta after the president leaves office, including legal action at home or abroad over the thousands of killings in his signature war on drugs.

Marcos, a former senator, is part of the Philippines’ most famous dynasty, with mother Imelda and sister Imee between them serving as congresswoman, governor, and senator.

Elections next year indicate a Duterte dynasty taking shape too, with the president’s two sons running for congress and city mayor.

Rodrigo Duterte is barred from seeking reelection as president.

Though Marcos Jr.’s run for the presidency has stirred anger among victims of his father’s brutal era of martial law, “Bongbong”, or “BBM”, as he is known, has led a new opinion poll on who should succeed Duterte next year, with a commanding lead over his rivals.

Marcos had 47 percent support in the Social Weather Stations poll conducted three weeks ago, commissioned by Stratbase Institute, which asked respondents who they would vote for as president.

The poll did not include Christopher “Bong” Go, Duterte’s closest aide, who only joined the presidential race on Saturday.

The Southeast Asian nation of 110 million people holds elections in May 2022 for positions from president down to governors, mayors and local officials