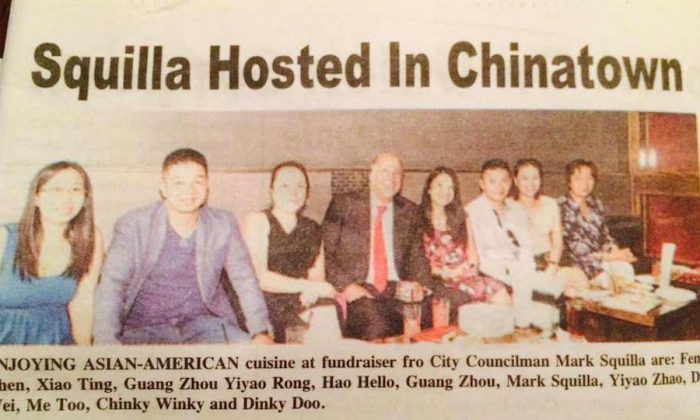 FORMER PHILADELPHIA CITY COUNCILMAN, now publisher of The Public Record, Jimmy Tayoun, shrugged off the Asian slurs that were published in his August 23 print edition as  “A proofreading error.”

Jim Tayoun’s The Public Record published a photo of Philadelphia city councilman Mark Squilla at an event in Chinatown as he was seated with a host of Chinese supporters.  The editor of the political newspaper printed some of the names as:

The print edition with the alarming slur was released to the public, and after the offense was discovered, publisher Jim Tayoun issued the following rather nonchalant statement to Philadelphia Magazine Friday afternoon:

“It was a proofreading error.”

Tayoun then went on to explain to Philadelphia Magazine that the editor of The Public Record used those names because he didn’t have all of the names of everyone pictured.  Philadelphia Magazine however noted to Tayoun that there were actually more names printed than there were actual people in the photograph.  At this point Tayoun stuck to his story and restated, “It was a proofreading error.”

Philadelphia Magazine asked Tayoun why the editor didn’t use a generic placeholder instead of an ethnic slur.  Tayoun asserted that there was no bigotry or prejudice involved in the caption.  He excused the editor by stating, “That editor is a Britisher…. he didn’t mean anything by it. The Public Record is the most inclusive publication in Philadelphia.”

Since his interview with Philadelphia Magazine, the online edition of The Public Record has changed a bit of its tune, only today issuing an apology to its readers.

” In our Aug. 23, 2014 issue an offensive slur was accidentally published in the Philadelphia Public Record. This shocking lapse of professional conduct occurred contrary to our editorial directives and in no way reflects the views of our staff or our organization.

An internal investigation is underway to uncover the source of this intolerable abuse and to prevent it from ever happening again. We apologize whole-heartedly to the Asian American community and to all Philadelphians of this vibrant, diverse city who work together to make it the best place in America to live and to grow.”

One may want to note that there was no apology in Tayoun’s first statement to Philadelphia Magazine. The online apology may have been fueled by public outrage in opposition to Tayoun’s original tepid response.

The Public Record was first published in 1999, and in 2000 it became a free weekly tabloid newspaper focusing on local politics.  Their sister publication, The South Philadelphia Public Record hit the presses in 2010.

Jim Tayoun is no stranger to controversy.  Tayoun is a former Philadelphia city councilman and state representative who became the focus of a major corruption investigation.  In 1991 he plead guilty to racketeering, mail fraud, tax-evasion, and obstruction of justice charges, and  served 40 months in prison. Tayoun was also  owner of Philadelphia’s popular Middle East restaurant and The Comedy Works stand-up comedy club which operated over-top of the restaurant.  The restaurant and comedy club closed after Tayoun’s conviction.

While Tayoun may have at first asserted that his British editor’s actions were in no way grounded in bigotry, the online apology reads quite a bit more solemnly, and expresses impending resolve.  It will be interesting to see if this British editor remains on at The Public Record.

In February 2012 famed basketball star Jeremy Lin burst on to the sports scene as a promising new break-out player for The New York Knicks.  He became all the rage as a formidable Asian American (Taiwanese) player in a sport dominated by African Americans.  Controversy then erupted when an editor for ESPN allowed a Jeremy Lin headline to read, “Chink In The Armor.”

The editor was Anthony Federico and he insisted that he was not trying to be “…punny or cute.”  He insisted that is was an honest mistake.  Federico was subsequently fired.

Between The Public Record caption and the ESPN debacle from a couple of years back, there seems to be an ever-present, alarming aberration taking place in American journalism. It seems to indicate that educated journalists have been hired at well established publications, and yet are seemingly unaware that the “C” word is the Asian equivalent to the “N” word.  What world have they been living in that has rendered them so oblivious to cultures outside of their own?  Is this innocent ignorance or a conscious, haughty presence of mind.

ESPN took the correct measures in letting Federico go.  The headline was highly offensive and unacceptable.  Mr. Tayoun may want to take a lesson and follow the same path as ESPN, and rid himself of anyone, no matter how educated they may be, who cannot comprehend that what they allowed was disgraceful to the publication as well as a malignant slight to the Chinese Americans of Philadelphia.

If integrity in journalism is to remain, we would be remiss to excuse these public slights. To allow this editor to stay is sending the wrong message to the Chinese community and to Philadelphia as a whole.  Moreover, what would possess the editor to publish the caption in jest even if it wasn’t a slur.  Aside from being a racial slur it diminishes the credibility of the newspaper.  Can The Public Record afford to cheapen their long-standing efforts with chimpanzee journalism?  We should hope not.

May Jim Tayoun do the right thing and let the Britisher go.