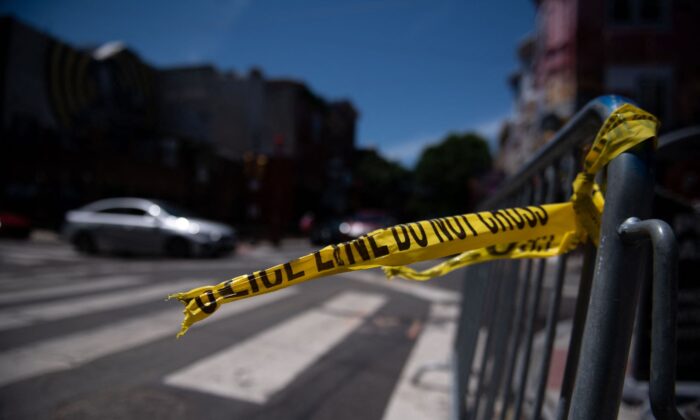 Police tape hangs from a barricade at the corner of South and 3rd Streets the day after three people were killed and 11 others wounded by gunfire all within a few blocks, in Philadelphia, Pennsylvania, on June 5, 2022. (Kriston Jae Bethel/AFP via Getty Images)
Policies & Impacts

Progressive de-prosecution policies likely caused 374 more murders during a five-year span in Philadelphia, according to research by Thomas Hogan, an attorney and a former prosecutor.

His research will soon be published in Criminology and Public Policy, a peer-reviewed journal of the prestigious American Society of Criminology.

De-prosecution is a policy to no longer prosecute certain criminal offenses. It is a signature policy move adopted by progressive prosecutors across the nation.

By 2019, the annual new prosecutions in Philadelphia dropped by a third to 9,514 when compared to 2014, the year right before the de-prosecution began.

Hogan counted new prosecution cases as those that had been charged and gone through preliminary hearings, based on data from the Administrative Office of Pennsylvania Courts.

He also found that as cases traveled through the system, more of them were dismissed before any consequences could be imposed at the sentencing stage.

By 2019, the annual number of sentencings dropped by 70 percent to 2,195 when compared to 2014, according to data from Pennsylvania Sentencing Commission.

Meanwhile, as prosecutions and sentencings dropped, murders climbed steadily to 356 in 2019, a 43.5 percent jump from 2014, based on FBI crime data.

Hogan excluded the pandemic years, 2020 and 2021, from his research because of data availability and aberrational factors caused by the pandemic and civil unrest.

To determine the causal relationship between de-prosecution and the jump in murders, Hogan used the synthetic control model, which allowed him to create an artificial city very much like Philadelphia except for one key difference—that city did not adopt de-prosecution policies.

He created the artificial city out of the 100 largest U.S. cities, excluding 17 that adopted de-prosecution policies.

By comparing Philadelphia to the artificial city, Hogan found that had Philadelphia not adopted de-prosecution, the city would have 74.79 fewer homicides every year between 2015 and 2019.

The finding’s probability value is well below the traditional threshold of 0.05, which means there is a relatively low chance that the result is mere chance.

He also found the de-prosecution of drug trafficking and felony weapon possession cases as the major drivers of the murder jump in Philadelphia during the five years.

Hogan’s research evolved from an idea he had when he was a student at the University of Pennsylvania.

“I get very different reactions when I explain the results to academics compared to regular folks. The academics all want to talk about challenging the methodology, robustness of findings, or particular issues of causal inference. The regular people look at the results and say, isn’t that obvious?” Hogan told The Epoch Times.

The Epoch Times reached out to Krasner’s office for comment.

According to Philadelphia Police Department data, murders in Philadelphia kept climbing after 2019, to 356 in 2020 and 562 in 2021—the deadliest year ever recorded in the city’s history.

On July 11, Pennsylvania lawmakers formed a bi-partisan House committee to investigate the troubling crime spree in Philadelphia. The committee is empowered to subpoena witnesses and documents from Krasner’s office.

The committee—formerly called the Select Committee on Restoring Law and Order—is expected to conduct investigations throughout the summer and produce a report in the fall. The committee’s recommended actions can go up to the impeachment of Krasner, according to a House resolution.