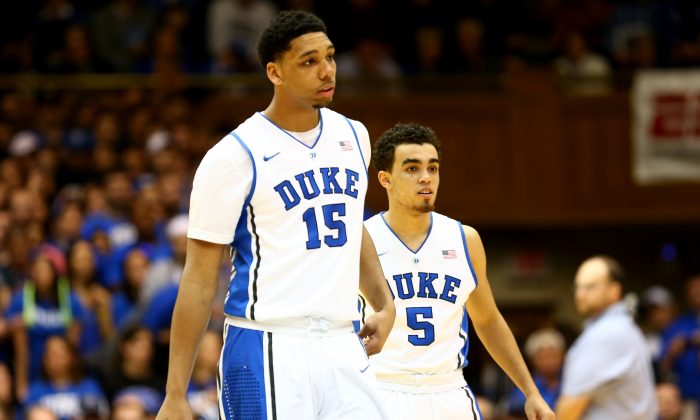 Jahlil Okafor #15 and Tyus Jones #5 of the Duke Blue Devils during their game against the Pittsburgh Panthers at Cameron Indoor Stadium on January 19, 2015 in Durham, North Carolina. (Photo by Streeter Lecka/Getty Images)
NBA

Phil Jackson and other key members of the New York Knicks management are watching Jahlil Okafor play on Sunday at Madison Square Garden.

Okafor, of Duke University, is projected to be the No. 1 overall pick in the 2015 NBA Draft.

Carmelo Anthony is also expected to be in the crowd watching the game.

New York, currently 8-37, have the second-worst record in the NBA, and are expected to get a top three draft pick, and a shot at the top pick.

The Knicks have jettisoned many of their best players to clear cap space for next offseason, and to try to win fewer games to get a higher draft pick.

Okafor is a 6’11”, 270 pound center in his first-year at Duke who is projected in many mock drafts as going first overall–particularly if the Knicks do get the first pick.

Emmanuel Mudiay, who is currently playing in China, is the other consensus top-three pick.