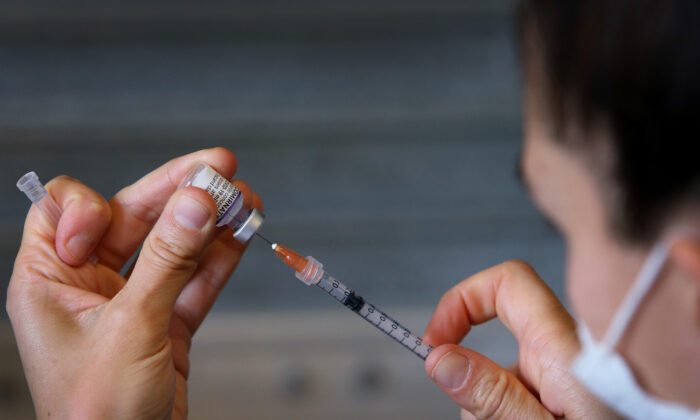 A nurse prepares a Pfizer vaccine overseen by a doctor in Sydney on Oct. 3, 2021. (Lisa Maree Williams/Getty Images)
By Jack Phillips

The protection afforded against the Omicron coronavirus variant fades quickly after a second and third dose of Pfizer–BioNtech’s COVID-19 vaccine, according to a peer-reviewed study published in the JAMA Network.

A Danish study published in the JAMA Network on May 13 found that there was a rapid decline in Omicron-specific serum neutralizing antibodies only a few weeks after the administration of the second and third doses of the vaccine.

The study evaluated 128 adults who were vaccinated, and of that number, 73 people received two doses of the Pfizer vaccine, and 55 people received three doses between January 2021 and October 2021 or were previously infected before February 2021, and then vaccinated.

“Our study found a rapid decline in Omicron-specific serum neutralizing antibody titers only a few weeks after the second and third doses,” an abstract of the study reads. “The observed decrease in population neutralizing antibody titers corresponds to the decrease in vaccine efficacy against polymerase chain reaction–confirmed Omicron infection in Denmark and symptomatic Omicron infection in the United Kingdom.”

The antibody levels, which are associated with protection against future infections, dropped within a few weeks of getting the vaccine doses. They were also much lower than the antibodies specific to the Delta and original COVID-19 strains, according to the study.

The proportion of Omicron-specific antibodies fell to 53 percent between the eighth and tenth week from 76 percent four weeks after the second dose. At weeks 12 to 14, these levels dropped even more to only 19 percent, according to the study.

Those antibodies increased with a third dose, increasing 21-fold three weeks after the dose before dropping to eightfold at week four. But with the third dose, antibody levels dropped as early as three weeks, falling 5.4-fold between the third and eighth week, the researchers said.

They concluded that it may be needed to provide additional booster doses to combat the Omicron variant, which emerged last fall, primarily among older individuals.

However, a study from Israeli researchers published in early April in the New England Journal of Medicine found that a fourth dose, or a second booster, of the Pfizer vaccine, doesn’t offer strong protection.

“Overall, these analyses provided evidence for the effectiveness of a fourth vaccine dose against severe illness caused by the omicron variant, as compared with a third dose administered more than 4 months earlier,” the study’s authors wrote at the time, after analyzing data from the Israeli Ministry of Health. “For confirmed infection, a fourth dose appeared to provide only short-term protection and a modest absolute benefit.”