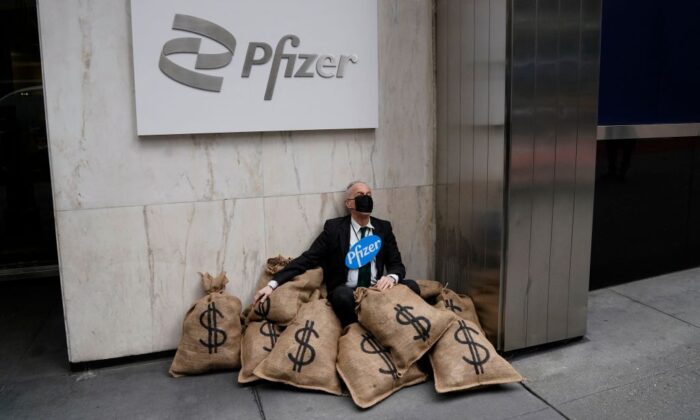 “We continue to supply the world with Comirnaty, which remains a critical tool for helping patients and societies avoid the worst impacts of the COVID-19 pandemic, and we are on track to fulfill our commitment to deliver at least 2 billion doses to low- and middle-income countries in 2021 and 2022, including at least 1 billion doses this year,” said Pfizer CEO Albert Bourla in a statement.

Paxlovid was given emergency use authorization by the U.S. Food & Drug Administration last December, since when it has become one of the fastest selling medicines of all time. While Paxlovid is purported to treat the CCP virus, its effectiveness has come under scrutiny since Monday, when Pfizer released a study indicating that Paxlovid had failed in a trial to prevent risk of infection to a significant degree.

While CCP virus vaccine distribution has slowed in the United States, Pfizer has steadily continued to administer its vaccine throughout the developing world. The company has pledged to supply up to 740 million doses to 57 low-income countries at a discounted rate.

However, in the first world, vaccination rates have largely plateaued, as government-imposed mandates are relaxed or abandoned altogether. Last week, Denmark became the first country to halt its CCP virus vaccination program outright, saying that the country now has the virus under control, although it left the door open to reinstating the vaccine program on a seasonal basis. Sweden has also implemented a less zealous vaccine policy, deciding last January to recommend against vaccination for children aged 5-11.

As the CCP virus has transitioned to an endemic disease, Pfizer and Johnson & Johnson have both maintained relatively high stock prices. Meanwhile, competitors Novavax and Moderna have floundered in recent months, shedding market value as investors increasingly fear that these companies are ill-equipped to maintain profits at pandemic levels during a protracted return to normalcy. While shares in Pfizer are down to $49.79 as of writing (from a high of $61.25 in December 2021), the company has thus far avoided a more severe downturn such as that seen by Novavax, which has fallen by more than 70 percent in the past year.