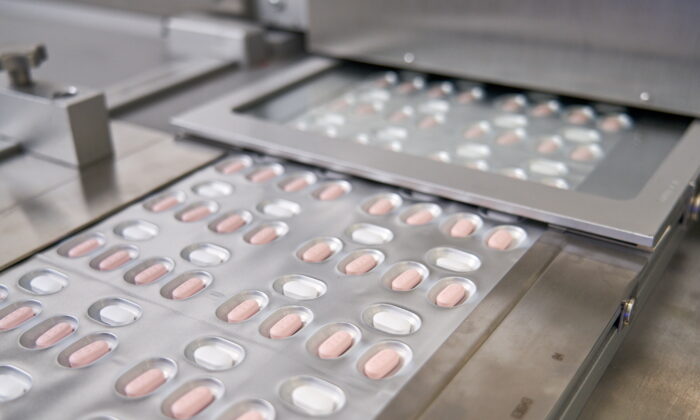 Paxlovid, a Pfizer COVID-19 pill, is seen manufactured in Ascoli, Italy, in this undated photo obtained by Reuters on Nov. 16, 2021. (Pfizer/Handout via Reuters)
WORLD

Pfizer has announced it will stop enrollment in a clinical trial for Paxlovid—its COVID-19 antiviral pill—for standard-risk COVID-19 patients after the latest results suggested the drug did not reduce symptoms or hospitalizations and deaths to a statistically significant degree.

Paxlovid, which consists of two different antiviral drugs—nirmatrelvir and ritonavir—is currently approved or authorized for conditional or emergency use in more than 65 countries, including the United States, to treat COVID-19 patients at high risk of severe illness, including hospitalization or death.

Pfizer said on June 14 that it will “cease enrollment into the EPIC-SR trial due to low rate of hospitalization or death in the standard-risk population.”

However, the company said it will still include the new data in its upcoming application to the U.S. Food and Drug Administration (FDA) to seek full approval for Paxlovid to be prescribed for high-risk COVID-19 patients.

“The company will focus efforts on generating further data on PAXLOVID in vulnerable populations, including longer treatment durations in immunocompromised individuals, as well as exploring other clinical development opportunities, such as its potential use in hospitalized patients with severe disease,” Pfizer added.

Standard-risk patients refers to COVID-19 patients who don’t have risk factors for severe disease. They can be vaccinated or unvaccinated.

The EPIC-SR trial, which started in August 2021, sought to compare Paxlovid to a placebo in adult patients with symptomatic COVID-19, who are not in hospital and “are at low risk of progressing to severe illness.”

In December 2021, Pfizer announced that results for Paxlovid did not meet the study’s goal of continuous symptom relief, or “self-reported, sustained alleviation of all symptoms for four consecutive days, as compared to placebo.”

On June 14, Pfizer announced that an updated analysis from 1,153 patients enrolled through December 2021 showed a 51 percent difference in hospitalization or death between the two groups—with five out of 576 in the Paxlovid group, compared to 10 out of 569 in the placebo group having required hospitalization or dying. The results were again not statistically significant.

There were no deaths in patients who received Paxlovid, but there was one death in the placebo group, the company stated.

The EPIC-SR study originally included fully-vaccinated people with at least one risk factor for progression to severe COVID-19, but after Paxlovid was authorized for the group in December 2021, this cohort was no longer enrolled in the study. Pfizer then adjusted its study eligibility criteria to allow people whose last vaccination was 12 months or more prior to enrollment.

A sub-group analysis of 721 vaccinated people with at least one risk factor for progression to severe COVID-19 showed there was a 57 percent risk reduction for hospitalization or death—with three out of 361 in the Paxlovid group, and seven out of 360 in the placebo group needing to be hospitalized or dying. The results did not reach statistical significance, Pfizer said.

Paxlovid also showed a non-significant 62 percent decrease in medical visits related to COVID-19 per day across all patients, relative to placebo.

Albert Bourla, the CEO and chairman of Pfizer, said in a statement that results from the company’s studies so far “support the efficacy and safety profile for PAXLOVID in the treatment of mild-to-moderate COVID-19 patients with at least one risk factor for progressing to severe COVID-19, regardless of vaccination status.”

“With up to 40–50 [percent] of people around the world estimated to be high risk, we believe there remains a significant unmet need for treatment options to help combat this disease, and we will continue to prioritize efforts to advance the development of PAXLOVID,” he added.

Data from a retrospective cohort study in Israel in early June, in a largely-vaccinated population, reported that Paxlovid reduces COVID-19 hospitalization and deaths by 46 percent. The study said the drug was “more effective in older patients, immunosuppressed patients, and patients with underlying neurological or cardiovascular disease.”

In a separate instance where Paxlovid failed to produce a statistically significant result, Pfizer announced in April that the antiviral pill was not effective at preventing symptomatic COVID-19 infection in household contacts of the COVID-19 patient who took the pill.

The United States has spent more than $10 billion to order from Pfizer 20 million courses of Paxlovid, and the White House has been seeking for more funds from Congress to support purchasing more of the antiviral pill as well as other treatments and vaccine booster doses.

The Centers for Disease Control and Prevention (CDC), warned in late May that some people may experience a rebound in COVID-19 symptoms after taking Paxlovid—meaning they may experience symptoms again after having had their symptoms resolved, or test positive for COVID-19 after having tested negative. The CDC said at the time that the rebound may be unrelated to the pill and “may be part of the natural history of SARS-CoV-2” in some people, “independent of treatment with Paxlovid and regardless of vaccination status.”