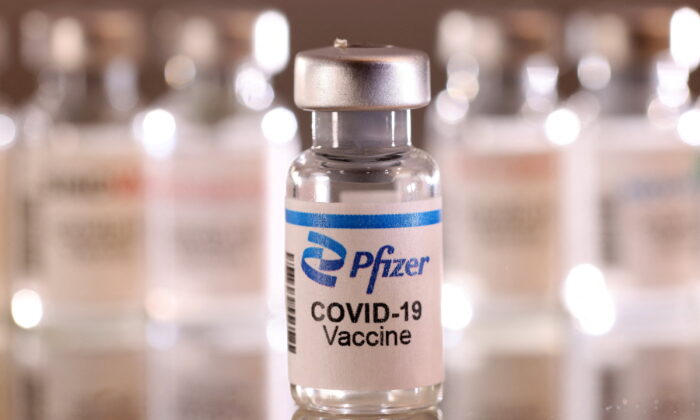 Pfizer and BioNTech’s clinical trial to evaluate their COVID-19 vaccine in pregnant women has been discontinued, according to a newly disclosed internal Pfizer email filed as evidence in a recent court case. The case in part questions whether the vaccine has been adequately tested to assess for risks to women’s reproductive health.

A professor of medicine at the University of Calgary sent an email on April 1 to Pfizer Canada inquiring about the status of the clinical trial, which was announced publicly in February 2021.

“I represent the Society of Obstetricians and Gynaecologists of Canada @ NACI [National Advisory Committee for Immunization],” professor Dr. Eliana Castillo wrote in the email, indicating she had two questions for Pfizer to “continue to support our providers and patients with our guidelines.”

Castillo asked why Pfizer had stopped enrolling subjects for its pregnancy trial and if enrolment was complete.

She also asked for the “DART data” on the Pfizer-BioNTech messenger RNA (mRNA) vaccine, referring to data from a Development and Reproductive Toxicity (DART) study on the injection. Castillo received a reply from Jelena Vojicic, vaccines medical lead at Pfizer Canada.

“The study enrolment was stopped with incomplete numbers because recruitment was slow and it became unreasonable/inappropriate to randomise pregnant women to placebo given the amount of observational evidence that the vaccine is safe and effective, coupled with increasing number of technical committees supporting immunization of pregnant women,” said Vojicic in an April 4 email.

Vojicic also provided the name and link to the DART study. The paper was published in August 2021 in the journal Reproductive Toxicology. It was titled “Lack of effects on female fertility and prenatal and postnatal offspring development in rats with BNT162b2, a mRNA-based COVID-19 vaccine.”

The emails were filed in Canada’s Federal Court as part of lawsuits challenging the government’s COVID-19 vaccine mandate for travellers.

The applicants (challengers) and the attorney general have presented a number of experts who submitted reports and were cross-examined as part of the legal proceedings. Each side had an expert to address the issue of the safety of COVID-19 injections for pregnant women, taking widely opposing views.

The government expert was Vanessa Poliquin, an associate professor at the Department of Obstetrics, Gynecology, and Reproductive Science at the University of Manitoba. Poliquin mentioned the Pfizer email in her expert report to defend the safety of the vaccines, which led to attorneys representing the applicants requesting the full email chain during Poliquin’s cross-examination in late June.

Poliquin provided commentary in her expert report on Pfizer’s rationale for stopping its clinical trial.

“In other words, Pfizer’s own medical experts (who are typically informed by the Data Safety and Monitoring Committee for clinical trials) acknowledge there that the retrospective data available in the medical literature on safety for pregnant women is so convincing that the lack of scientific equipoise [uncertainty] makes it unreasonable (and unethical) to continue a human trial,” wrote Poliquin.

She added that a “large body” of retrospective data has demonstrated no evidence of a correlation between the mRNA injections and pregnancy complications.

The Epoch Times contacted Pfizer Canada to confirm the termination of the trial and the associated rationale but didn’t hear back.

Castillo told The Epoch Times in an email she is satisfied with the response provided by Pfizer.

“Given unequivocal evidence of harm from covid-19 infection in pregnancy and of vaccine-mediated protection from hospitalization and severe disease it became basically unethical to enrol pregnant individuals in a placebo controlled trial,” she wrote.

Pfizer and BioNTech had announced via a press release on Feb. 18, 2021, that the first participant in its global trial had been dosed to evaluate the “safety, tolerability, and immunogenicity” of their BNT162b2 vaccine in pregnant women.

No subsequent press release on the trial was ever published.

The Wall Street Journal reported in September 2021 that the trial was having trouble enrolling participants.

Trial-site researchers explained to the Journal that this was due in part to governments and physician groups recommending vaccination for pregnant women and because the pool of participants was shrinking due to mass vaccine rollouts.

Nevertheless, Pfizer still told the Journal it would complete the trial.

Dr. Joseline Zafack, a senior epidemiologist at the Canadian National Advisory Committee for Immunization (NACI) who had provided Castillo with contact information for Pfizer, did not respond to requests for comment on the termination of the trial.

The Epoch Times also reached out to Health Canada to find out if Pfizer had told the agency it was not pursuing its clinical trial on pregnant women and if this was a concern for them. An unidentified spokesperson deferred comment to Pfizer.

The department’s advisory committee strongly recommends pregnant women be vaccinated with mRNA shots and receive a booster when eligible.

Health Canada says mRNA vaccines have shown no increase in pregnancy loss, preterm birth, or stillbirth, and no impact on fertility in men and women.

The Moderna and Pfizer shots use mRNA technology.

Government tracking of adverse events caused by COVID vaccination shows five fetal growth restrictions and 85 spontaneous abortions as of July 22 for all brands of COVID-19 vaccines.

The Pfizer-BioNTech product is associated with all five fetal growth restrictions and 64 spontaneous abortions. It is by far the most administered COVID-19 injection in Canada, with over 66 percent of total doses as of Aug. 14.

The expert presented by the vaccine mandate challengers, obstetrician/gynecologist Dr. Valentina Cvetic, raised several specific concerns on the issue of pregnancy and fertility.

Neither Pfizer nor Moderna have conducted studies to show that their products are safe for women who are pregnant or breastfeeding, Cvetic noted in her expert report.

She said that there are no studies that prove the vaccines are not associated with miscarriage if given in the first and early second trimester, and that long-term effects are not known due to recent marketization.

Cvetic also mentioned the issue of menstrual cycles being disrupted by vaccination, which she says “brings concerns about what this may mean to women’s reproductive health.”

“There is not enough scientific evidence to support a recommendation that all women who are pregnant or of childbearing age take this experimental vaccine,” Cvetic concluded.

The phase 3 clinical trials for the mRNA injections produced by Moderna and Pfizer are still ongoing and expected to end respectively in December 2022 and December 2023.