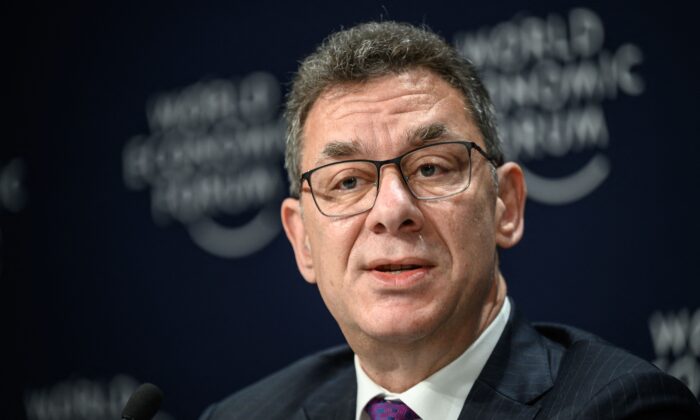 Pfizer’s CEO announced on Aug. 15 that he has tested positive for COVID-19.

“I would like to let you know that I have tested positive for #COVID19,” Albert Bourla, who also is the company’s chairman, wrote on Twitter. He reported experiencing mild symptoms, although he didn’t identify any of them. He said he’s “feeling well.”

Bourla, 60, said he has received four doses of his company’s COVID-19 vaccine, which has proven increasingly ineffective against infection from the virus that causes COVID-19.

“We have come so far in our efforts to battle this disease that I am confident I will have a speedy recovery. I am incredibly grateful for the tireless efforts of my Pfizer colleagues who worked to make vaccines and treatments available for me and people around the world,” he said.

He is isolating and has begun taking a course of Paxlovid, Pfizer’s COVID-19 antiviral pill.

U.S. drug regulators granted emergency use authorization for Paxlovid in December 2021 for people aged 12 and older who test positive for COVID-19 and are deemed at high risk for progression to a severe case.

Regulators have since curbed or revoked similar clearances for many other drugs, such as Regeneron’s monoclonal antibodies, citing data that indicate the treatments aren’t as effective, or aren’t effective at all, against newer virus variants.

Paxlovid has become the most-distributed COVID-19 treatment in the nation; it was administered to President Joe Biden after he recently tested positive for COVID-19.

Biden, who also has received four doses of Pfizer’s vaccine, experienced a rebound of symptoms after testing negative, which is common for Paxlovid recipients.

Bourla is among the officials who have previously promoted the COVID-19 vaccines as being 100 percent effective against infection.

In April 2021, he shared the results from a study that was said to show that Pfizer’s vaccine was 100 percent effective in preventing COVID-19 cases in South Africa.

However, all COVID-19 vaccines have been shown to be less effective against both infection and severe illness as newer virus variants have emerged.

Against the Omicron coronavirus variant, which became dominant in the United States and many other countries in late 2021, the vaccines provide little shielding against infection and decreased protection against severe cases.

Emerging data indicate that Omicron subvariants are even better at evading vaccine-based protection.

Pfizer and Moderna are among the companies working on Omicron-specific booster doses. Those could be rolled out in the United States as soon as next month.