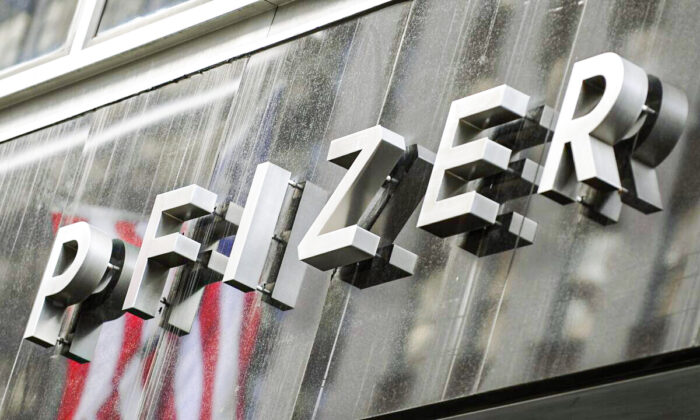 A sign for Pfizer is displayed in New York in a file photograph. (Timothy A. Clary/AFP via Getty Images)
Businesses in COVID-19

Pfizer on Tuesday said it submitted a request for emergency clearance for a pill designed to treat COVID-19.

The treatment, known as Paxlovid, is meant to keep COVID-19 patients with mild or moderate symptoms out of hospitals.

It reduced the risk of hospitalization or death in a clinical trial, according to an interim analysis the company described in a press release on Nov. 5.

The Food and Drug Administration (FDA) will now consider whether to grant emergency use authorization to Pfizer for the pill.

“We are moving as quickly as possible in our effort to get this potential treatment into the hands of patients, and we look forward to working with the U.S. FDA on its review of our application, along with other regulatory agencies around the world,” Albert Bourla, Pfizer’s chairman and CEO, said in a statement.

Merck already submitted documents to the drug regulator for its COVID-19 pill, but no action has been taken more a month later. The FDA’s drug advisory panel is set to meet on Nov. 30 to discuss that treatment.

Merck’s pill also showed effectiveness in reducing the risk of hospitalization and death, according to a clinical trial.

Both drugs are designed to treat patients who have not progressed to needing hospital care.

They would add to the slate of existing treatments, which include monoclonal antibodies. The ease of taking a pill is a primary draw; people could take the treatment at home instead of needing to travel to a facility to get an intravenous injection.

The FDA declined to answer questions about Pfizer’s submission, including whether it will be also be discussed during the upcoming meeting.

“We are committed to quickly and thoroughly reviewing all submitted applications, including requests for Emergency Use Authorization, to speed patient access to medicines to prevent or treat COVID-19 provided they meet the agency’s rigorous standards,” a spokeswoman told The Epoch Times in an email.

Pfizer earlier Tuesday said it would let manufacturers in 95 countries make its pill. The agreement is aimed at widening access.

Experts say the pills could help Americans combat COVID-19, including in vaccinated people who contract the illness.

“This pill will have a significant impact on the pandemic if cleared. It can be used with breakthrough cases with the vaccinated and it can be utilized with the non-vaccinated,” Aliasger Salem, a pharmaceutical sciences professor at the University of Iowa’s College of Pharmacy, told The Epoch Times in an email.

Some say it’s still important to get vaccinated against the CCP (Chinese Communist Party) virus since vaccines have mostly held up against severe disease and death over time.