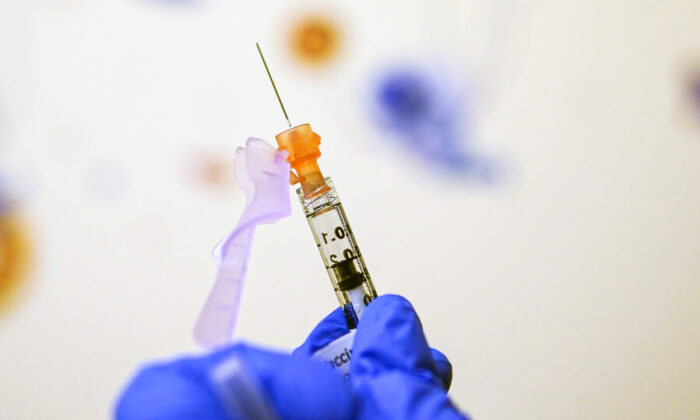 Pfizer and its German pharmaceutical partner BioNTech announced they are submitting a request to the U.S. Food and Drug Administration (FDA) to authorize extra-low doses of their COVID-19 vaccine for children 6 months through 4 years of age.

The FDA had urged Pfizer-BioNTech to apply for the Emergency Use Authorization (EUA) earlier than the companies had planned.

If the FDA grants the authorization, it would be the first COVID-19 vaccine for the age group in the United States. A decision is expected as soon as by the end of February.

“This application is for authorization of the first two 3µg doses of a planned three-dose primary series in this age group,” the companies announced in a statement on Feb. 1. “Data on a third dose given at least 8 weeks after completion of the second dose are expected in the coming months and will be submitted to the FDA to support a potential expansion of this requested [Emergency Use Authorization (EUA)].”

In December 2021, Pfizer-BioNTech announced that early testing suggested that a low dose of its COVID-19 vaccine didn’t yield a significant immune response in children aged 2 to under 5, but did so for those aged 6 months to 2 years. Pfizer-BioNTech amended its clinical trial and is now testing a third 3 µg dose that will be administered at least two months after the second dose of the two-dose series. Data is expected in late March.

If the three-dose study is successful, the companies will seek FDA emergency authorization for a third dose for children aged 6 months to under 5 years old in the first half of 2022, Pfizer-BioNTech announced.

The FDA on Feb. 1 announced a virtual meeting will be held on Feb. 15 for a panel of researchers and physicians to publicly review the Pfizer data and discuss the EUA request. The FDA isn’t required to follow the advice of its Vaccines and Related Biological Products Advisory Committee (VRBPAC). The meeting will be live-streamed on the FDA’s YouTube channel and from the FDA website.

“Ultimately, we believe that three doses of the vaccine will be needed for children 6 months through 4 years of age to achieve high levels of protection against current and potential future variants. If two doses are authorized, parents will have the opportunity to begin a COVID-19 vaccination series for their children while awaiting potential authorization of a third dose,” Albert Bourla, the CEO of Pfizer, said in a statement.

Young children are much less likely compared to adults to die or have serious complications from COVID-19, the disease caused by the CCP (Chinese Communist Party) virus.

Dr. Robert Malone, a virologist and immunologist who has contributed significantly to the technology of mRNA vaccines, previously issued a strong caution for parents who seek to have their healthy children vaccinated against COVID-19.

“Think twice before you vaccinate your kids. Because if something bad happens, you can’t go back and say, ‘whoops, I want a do-over,’” Malone told EpochTV’s “American Thought Leaders” program in an interview in January 2022. He said that with regard to mRNA-based COVID-19 vaccines, “a viral gene will be injected into your children’s cells” that “forces your child’s body to make toxic spike proteins.”

“These proteins often cause permanent damage in children’s critical organs, including their brain and nervous system, their heart and blood vessels, including blood clots, their reproductive system, and this vaccine can trigger fundamental changes to their immune system,” he said.

Sweden’s government in January declined to recommend giving COVID-19 vaccines—without naming any specific vaccine—to children under 12 years old, saying there would be a little medical benefit in doing so.

Vaccine manufacturers are immune from liability for any adverse reactions unless there’s “willful misconduct” involved. Vaccine providers are required to report any serious adverse effects or vaccination administration errors to VAERS, hosted by the U.S. Department of Health and Human Services.

The federal government has a countermeasures program that can compensate eligible persons who suffer serious injury from approved vaccines. But the burden of proof has proven a challenging process.