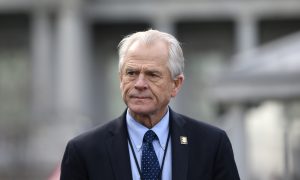 Trump administration adviser and economist Peter Navarro on Friday stated that NBA athletes and Hollywood celebrities are “useful idiots” of the Chinese Communist Party (CCP), suggesting the Democrats are unwittingly playing into the hands of the Chinese regime.

Navarro, while saying that he will “never ever watch an NBA game again,” told The Epoch Times’ “American Thought Leaders” that athletes are reticent to speak out about the Chinese regime because they are beholden to its interests.

“They shut up and dribble when they’re over in China,” he said but added that there are “sweatshops in China” that “make sneakers for their stars” and “sell [them] back to American kids.”

His comments came as the NBA season wrapped up several weeks ago, with the Los Angeles Lakers winning another championship. However, ratings for the NBA Finals hit record lows, and polls have suggested that NBA players’ pro-Black Lives Matter and left-leaning political rhetoric is partially to blame.

“These NBA players, not only do they ignore that, but then they have the temerity to get on their soapbox and sound self-righteous about what they see as a repressive America,” he said, referring to the Black Lives Matter protests.

But “the bigger problem,” Navarro argued, “is they feed this narrative that somehow China’s authoritarian government and socialist-communist economic system is superior to ours.”

Hollywood is also capitulating to the CCP, Navarro said in the interview, noting that there has been a push for studios to remove content to make it palatable for Chinese audiences and regime censors.

A report from PEN America, a nonprofit that promotes free speech, found that the makers of blockbuster films like “Iron Man 3,” “World War Z,” and “Top Gun: Maverick” are pandering to the CCP but cutting out dialogue and characters that aren’t pro-China.

“Filmmakers cannot reduce their work to the lowest common denominator of only content that is deemed acceptable by one of the world’s most censorious regimes,” the PEN report stated. “Hollywood’s approach … is setting a standard for the rest of the world.” In one example, Paramount Studio executives demanded dialogue about a virus in “World War Z” originating in China be omitted from the film due to the regime’s sensitivity.

The NBA has not responded to a request for comment.