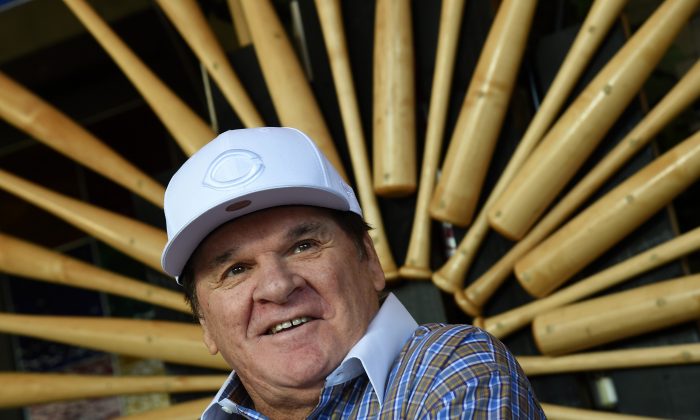 Rose, who was a Cincinnati Red from 1963 to 1986, was banned from playing baseball in 1989 for gambling on games. Despite his tarnished reputation, Rose is still a popular figure in Ohio.

Hours before the endorsement Trump said during a rally in West Chester, Ohio, “We gotta let Pete Rose in the Hall of Fame,” drawing cheers.

We gotta let Pete Rose in the Hall of Fame.
— Donald Trump

In addition to being banned from playing baseball, Rose has been barred from entering the Baseball Hall of Fame. In December 2015, MLB Commissioner Rob Manfred had this to say:

Mr. Rose has not presented credible evidence of a reconfigured life either by an honest acceptance by him of his wrongdoing… or by a rigorous, self-aware and sustained program of avoidance by him of all the circumstances that led to his permanent ineligibility in 1989.

Following that announcement, Trump called for Rose to be admitted into Cooperstown tweeting, “It’s time, he has paid a big and very long price!”

Let Pete Rose into the Baseball Hall of Fame. It’s time, he has paid a big and very long price!

The endorsement comes three days before Trump is set to compete in the highly contested Ohio primary. The latest polls shows a close race between Ohio Governor John Kasich and Trump, with a slight lead in favor for Kasich, according to RealClearPolitics polling averages.

It’s been pointed out, however, that this is not the first time that Mr. Rose has used a signed baseball write a message. He has also used baseballs to write: “I’m sorry I shot J.F.K.” and “I was the first man on the moon.”

.@realDonaldTrump b4 u get 2 worked up, know that @PeteRose_14 will sign anything u tell him pic.twitter.com/1veSFZ9Oq0