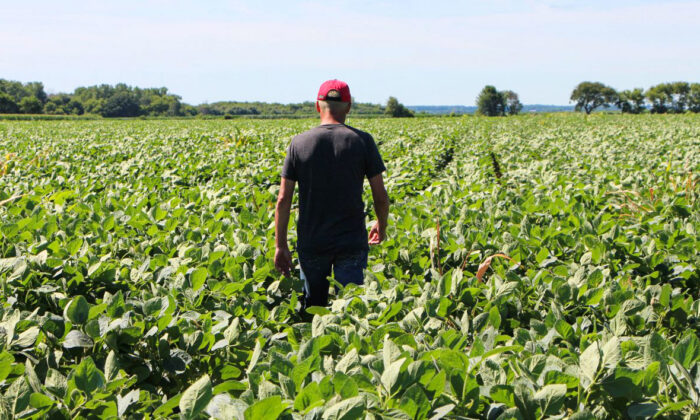 ‘Perfect Storm’ Hitting US Crop Planting Amid Talk of Shortages

When farmers in the United States returned to their fields in April, officially kicking off the 2022 growing season, they implemented significant changes in their crop plantings.

Some experts believe that forecasts for the 2022 growing season may outstrip existing production resources and may be overly ambitious.

The U.S. Department of Agriculture (USDA) conducted a survey of producers across the country that shows their intentions to plant a record-high 91 million acres of soybeans in 2022. That would be an increase of 4 percent from last year.

However, corn growers surveyed across 11 states revealed a planting forecast of only 89.5 million acres this year. That represents a production drop of 4 percent.

Record-low corn production is expected for 2022 in three states—Connecticut, Massachusetts, and Rhode Island.

Wheat planting is at its fifth-lowest level since 1919.

Despite the challenges, U.S. farmers are soldiering on with strategic moves in an effort to “make do” with what’s available in terms of resources, both artificial and natural.

“For lack of a better pun, it’s the ‘perfect storm.’ We are having fertilizer shortages and also general chemicals related to agriculture,” Reb Wayne, of the Texas Department of Agriculture, told The Epoch Times.

Wayne said smaller yields are a possibility from supply scarcity combined with the devastating effects of drought.

“It is already having an impact from what we have seen,” he said. “People are talking about planting less, and farmers are concerned the yields will be lower regardless, which often happens as a function of drought.

“It’s hard to measure at this stage what that full impact will be, [but] as far as the buzz in the industry is certain, this is going to have a smaller yield across the board. It’s not just one crop.”

On March 11, the USDA announced a plan to invest $250 million in U.S.-based fertilizer production. The new grant program aims to ease inflated costs and shortages.

Fertilizer supplies in the United States have suffered a series of setbacks that began with pandemic-related supply chain issues, creating a noticeable scarcity in 2021.

The price increase resulting from Moscow’s conflict in neighboring Ukraine is because Russia is the world’s largest exporter of fertilizers, accounting for 23 percent of ammonia exports, 14 percent of urea exports, 10 percent of processed phosphate exports, and 21 percent of potash exports.

As part of their crisis response, the USDA intends to launch a public inquiry seeking information about seeds and agricultural inputs, fertilizer, and retail markets to address growing concerns on the logistics side.

“Recent supply chain disruptions—from the global pandemic to Putin’s unprovoked war against Ukraine—have shown just how important it is to invest in this crucial link in the agricultural supply chain here at home,” Agriculture Secretary Tom Vilsack said.

In Missouri, which is home to 95,000 farms, the inflated price tag of production materials has hit growers hard.

“High input costs are certainly a concern. Fertilizer costs are double and triple in many instances what they were last year,” Christi Miller, of the Missouri Department of Agriculture, told The Epoch Times.

Miller said projections indicated that Missouri farmers would also be planting less corn, at an estimated 3.5 million acres in 2022. If realized, this would be 100,000 acres less than the previous year.

Because of corn’s versatile use in food products, experts predict planting shortages will continue to generate higher prices for maize, the cost of which has already risen by 5.5 percent this year. This would affect multiple consumer goods, from cornflour to starch and high fructose corn syrup.

Cereal and grain product prices also will likely rise by 7 percent on store shelves this year.

“All food prices are now predicted to increase,” the USDA’s Economic Research Service said in a March report.

Although Missouri corn growers are following an established reduction trend, Miller said consumers can expect more soybeans from the state.

While she indicated that the high cost of fertilizer may be a factor in the conscious decision to plant less corn, she also said the price of soybeans may also play a part. She noted that farmers planned to use an estimated 6.1 million acres for soybean production.

Market prices for soybeans in March were at their highest since 2012, when they hit more than $17 per bushel because of production changes in Brazil and increased demand from China.

Profits and shortages aside, drought remains a significant factor in some of the planting changes U.S. farmers are making this year.

“We’re hearing some of those concerns from the south, and the Rio Grande Valley, and in south Texas, where a lot of our vegetable crops come from. The lack of rain even affects our rice farmers,” Wayne said.

Drought conditions will hit the 2022 growing season in at least 20 states, many of which are suffering historic water shortages.

The U.S. Drought Monitor has stated that it’s critical that farmers grow more with less water this season and that the outlook through June anticipates enduring dry spells for nearly half of the country.

Remarkable ground coverage is offered by grass-like products, such as rye, wheat, and a sorghum-sudangrass hybrid. Water-efficient legumes, such as medic and Indianhead lentils, also fall under the heading of cover crops.

In February, the USDA announced its plan for the 2022 pandemic cover crop program, which offers farmers who’ve planted a qualifying cover crop this year a premium benefit of $5 per acre on top of their existing insurance.

“Our concern with what we’re seeing here is not just one thing, it’s across the board,” Wayne said.