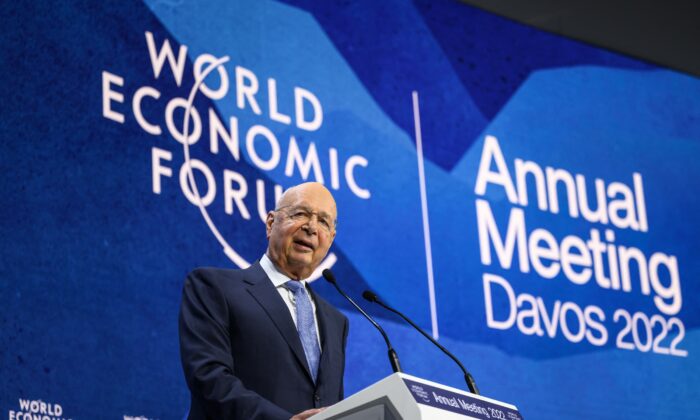 An article published on the World Economic Forum (WEF) website has called for the world to transition to “green energy,” insisting that it is the key to protecting democracy.

In the article, Colorado State University economics professor Edward Barbier claims the world is facing two global crises of climate change and the decline of democracy. In order to sustain global warming below 1.5 degrees Celsius (34.7 degrees Fahrenheit), he said the world must take immediate action and reduce carbon emissions, which includes the increased use of green energy technologies.

Barbier compared data from 83 countries classified as “advanced,” “emerging market,” and “developing” to make the case that the nations that have taken steps toward green energy are “largely free and democratic.” In contrast, countries that are not taking enough steps toward the green transition are “typically less free and more autocratic,” he claimed.

But the WEF article’s suggestion that cutting down fossil fuel consumption will help with pollution and climate change contradicts actual data on U.S. emissions.

After President Joe Biden took office in 2021, he pushed forward several green energy policies to reduce the use of fossil fuels, but America’s carbon emissions actually increased in 2021 after declining for 10 years.

Some explain the emissions increase by attributing it to the economy opening up after the COVID-19 pandemic.

But others have pointed out that the United States increased its use of coal under the Biden administration because of Biden’s hostile attitude toward the oil and gas industry, which has led to high prices and underinvestment in new production and pipelines.

As of mid-June 2022, America’s oil refining capacity had fallen by 800,000 barrels per day. Half the refineries that closed did so as they were being converted for renewable fuel production.

Canadian leaders have also taken notice of the energy crisis.

At a press conference on March 11, Sonya Savage, energy minister for Alberta, Canada, noted that the Russian invasion of Ukraine had exposed the weakness of America’s energy policy. For the past decades, Western democracies have focused on climate change and carbon emission reductions without considering energy security, she said.

This “failed North American energy strategy” has now put the United States and Canada in a position where it is difficult to raise or even maintain domestic energy production, she said. In contrast, Russia can ramp up production without having to stick to any environmental standards.

This essentially results in the “transfer of production of oil and gas from North America to places like Russia,” Savage said.

Barbier pointed to Russia’s invasion of Ukraine and the resulting energy crisis to support his argument that countries not aiming for a low-carbon economy could be at “greater economic peril.”

He recommends that industrialized nations should phase out tax breaks for fossil fuels, impose higher taxes on “carbon-intensive” imports from other countries, and reform fossil fuel markets to fund green investments and innovation.

If these steps were to be implemented, it would drive up fossil fuel prices and, as a result, increase gas and energy prices.

The current situation in the Netherlands between the Dutch government and Dutch farmers also appears to contradict Barbier’s claim about green environmental policies leading to more freedom.

In an attempt to reduce nitrogen output to meet emissions goals in line with the World Economic Forum’s recommendations, the Dutch government announced plans that would require farmers in some areas to reduce their nitrogen output by 95 percent and cull livestock herds, resulting in the mass slaughter of animals and significant destruction of farming operations.

Farmers who don’t cooperate with the mandate face having their farmland confiscated by the government, according to a report by the U.S. Department of Agriculture (pdf).

The Netherlands is the second-largest food exporter in the world.

Farmers and truckers in the Netherlands have staged major protests over the environmental mandates, shutting down food distribution centers and airports in an effort to force the government to reverse the mandates.