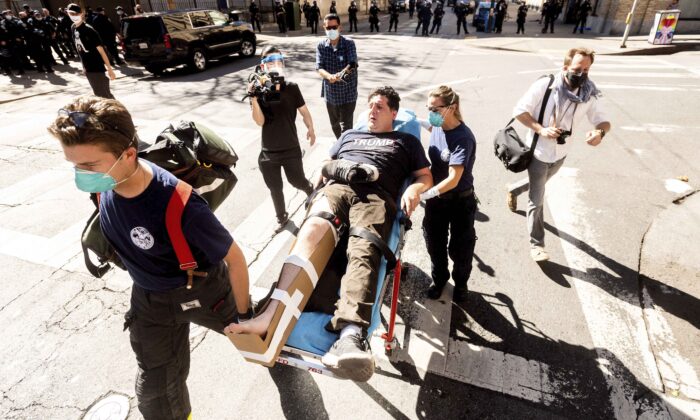 Medics transport a supporter of President Donald Trump to an ambulance after he was attacked by counter-protesters in San Francisco, Calif., on Oct. 17, 2020. (AP Photo/Noah Berger)
US News

A number of individuals from the counterprotester group physically attacked conservatives, including event organizer Philip Anderson, who lost a front tooth after he was punched in the mouth, while one man wearing a Trump T-shirt had to be taken away in an ambulance after being attacked. A police officer also had to be taken to the hospital.

A photographer working for The Associated Press also witnessed an injured San Francisco police officer on the ground by San Francisco’s United Nations Plaza after the sergeant tried to prevent the attacks from counterprotesters.

Team Save America organized the rally to protest Twitter’s banning of a NY Post article alleging that Hunter Biden had set up a meeting for a Ukrainian businessman with his father, then-Vice President Joe Biden, during the Obama administration. The Biden campaign has denied the allegations.

Anderson, posted photos and videos to social media of his bloody mouth with a front tooth missing and another hanging loosely. He said “Antifa” protesters attacked him “for no reason.”

Anderson took the stage at about 1 p.m. and was greeted by chants and plastic water bottles and glass bottles thrown over police barricades.

The event was canceled, although both sides lingered in the area into the afternoon.

The San Francisco Police Department said three officers suffered non life-threatening injuries when they were assaulted with pepper spray and caustic chemicals. One officer was taken to a local hospital for treatment, the department said.

No arrests were made, the department said.

Anderson called the counterprotesters hypocrites and said they are the reason why he’s voting for President Donald Trump.

“I love America, I love this country, and I love free speech,” he said.