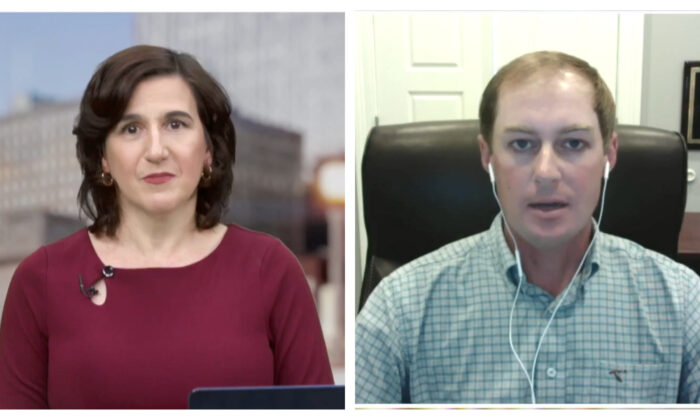 Cody Flint in an interview with NTD's "The Nation Speaks" program broadcast on Jan. 1, 2022. (Screenshot via The Epoch Times)
Vaccines & Safety

People Injured by COVID-19 Vaccine Are Left in the Dark: Agricultural Pilot

“At this point, the government has totally abandoned us,” Cody Flint, a vaccine-injured pilot, told NTD’s “The Nation Speaks” program in an interview broadcast on Jan. 1.

“The PREP Act stated that vaccine injuries were given an outlet to go seek compensation and financial help in the name of the Countermeasure Injury Compensation Program—the CICP—it’s an absolute joke,” Flint said. “We are totally left in the dark.”

The Public Readiness and Emergency Preparedness (PREP) Act authorizes the secretary of the Department of Health and Human Services (HHS) to issue a declaration to provide liability immunity against any claim of loss resulting from the manufacture or use of medical countermeasures, which include medicines, vaccines, and medical supplies, to treat diseases.

On March 10, 2020, former HHS Secretary Alex Azar issued a PREP Act declaration for medical countermeasures against COVID-19. The declaration has been extended or amended multiple times. The liability protection is extended through Oct. 1, 2024.

Under this declaration, a vaccine-injured person can’t sue COVID-19 vaccine manufacturers like Pfizer, Moderna, and Johnson & Johnson, or federal health agencies like the U.S. Food and Drug Administration (FDA) that approved or authorized these vaccines.

Flint pointed out the extremely low acceptance rate of the CICP. Of the 499 claims filed before the pandemic since the program was introduced in 2010, the CICP has compensated only 29 claims.

The Health Resources and Services Administration (HRSA), an HHS agency that runs CICP, responded to The Epoch Times via email that “The CICP is working to process claims as expeditiously as possible.”

“Just an exciting day—thought we were gonna put this behind us,” Flint recalled.

But within 30 minutes, he developed an odd headache after receiving the vaccine. Two days later, he took his first flight that year. Immediately after takeoff, he had tunnel vision. Flint tried to push forward to keep his commitment to his client. But he felt like a bomb went off inside his head in the end. He couldn’t remember how he landed the plane back on the runway.

“Really by the grace of God that there was not an accident. I went to my family doctor immediately,” Flint said.

Later, he was told that his inner ears were ruptured, and fluid inside was leaking inward toward the inside of his skull. Doctors explained that only highly elevated intracranial pressure from things like a car wreck, major head trauma, or things of that nature could make that happen to both of his ears at the same time on the same day.

“Obviously, I had none of those. The only thing that changed in my life was I got the vaccine and developed a severe headache immediately that got worse leading up to that point,” Flint said.

Flint went through two surgeries and dozens of doctor visits afterward. His condition improved, but he still has trouble driving.

“I don’t know what my next stepping stone in life is going to be. I don’t know,” Flint said, noting that his pilot license was taken away. “I don’t know what to do at this point. I spent every dime I’ve saved my entire life on the surgeries and just trying to survive and feed my family since the incident happened.”

Having been an agricultural pilot for 15 years, Flint said he’s not an anti-vaxxer. “I signed up and got it the first day I could possibly get it. I believed in vaccines,” Flint told The Epoch Times last month.

Now Flint is critical of the vaccine mandate.

“That’s the Achilles heel of the mandate. This does not fit everyone. It’s not a one-size-fits-all solution,” Flint told NTD. “There are thousands and thousands of people around the country. I’ve been in touch with a lot of them that have had absolutely life-altering, career-ending injuries from these vaccines. A lot of them are pilots. It is scary that how many pilots are being injured by this.”

The Centers for Disease Control and Prevention (CDC) has repeatedly said the serious adverse events after COVID-19 vaccination may occur but are rare.

Flint also criticized the federal health agencies for not being transparent with the safety data of the vaccine.

Early last month, the FDA asked a judge to give it 75 years to produce data concerning the Pfizer and BioNTech vaccine. On Thursday, a federal judge ordered the agency to provide such data in about eight months.

“FDA released their very first 91-page batch of safety data. Those 91 pages covered December 2020 through Feb. 28, 2021,” Flint said, referring to the first report (pdf) released. “In those two and a half months, Pfizer was able to confirm 1,223 deaths as a direct result of the Pfizer vaccine.”

For comparison, Flint said the swine flu vaccine in 2009 was pulled from the market after 47 deaths because it was too dangerous. “You have to ask yourself, what is going on here?”

Pfizer responded saying that’s an inaccurate interpretation of the data.

The figure of 1,223 fatalities among 158,893 adverse effects reflects “spontaneous” reports from sources that include health officials in several countries, without any verification of the cause, among the millions of vaccinated people worldwide during that period, Pfizer spokeswoman Dervila Keane told AFP last month.

It does not indicate specific causes of death, and the fatalities may include people with “various illnesses” such as cancer or cardiovascular disease, Keane added.

Flint told NTD that he will fight, hoping that people don’t have to go through what his family is going through.

The National Vaccine Injury Compensation Program (VICP) may provide compensation for injuries or deaths associated with most vaccines routinely administered in the nation, such as flu vaccines and vaccines administered to children. Another is the CICP, which may provide compensation for injuries and deaths resulting from “covered countermeasures” under the PREP Act during certain public health emergencies.

The CICP’s compensation is very limited—capped $50,000 a year for lost employment income (lifetime cap is generally $379,000). A standard death benefit is $370,376 as of 2021. It doesn’t cover attorneys’ fees, pain-and-suffering damages, or punitive damages.

The VICP’s compensation is much broader than that of CICP. Besides the loss of earnings, it covers reasonable attorney fees and cost from medical care, rehabilitation, and vocational training. It also covers pain and suffering and emotional distress, capped at $250,000. For a vaccine-related death, the compensation amount is $250,000.

Vaccine-injured victims under VICP also have three years from the date of the first symptom to file the claim. CICP only allows people to file the claim within one year from receiving the vaccine.

Experts specializing in vaccine law said it is very difficult to get CICP compensation.

“This government compensation program is very hard to use,” Dorit Reiss, a professor at the University of California Hastings College of Law, told CNBC last month. “The bar for compensation is very high.”

The CICP requires the injury to either meet the requirements on a Countermeasure Injury Table or be a direct result of the use of a covered countermeasure.

But maybe the most crucial thing is people have no legal protection under CICP.

“The CICP lacks the protections of the U.S. legal system. There is no transparency, no court, no judge, and no right to appeal. Decisions about compensation are made in a black hole by a nameless administrator,” stated the Maglio Christopher & Toale Law Firm, a law firm specialized in vaccine injury cases.

Nick Vandennieuwenhof contributed to this report.