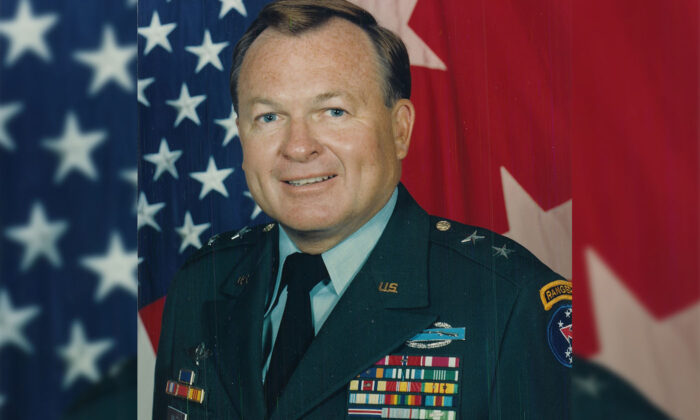 ‘People Have to Stand Up Before We Are Led Into a Really Bloody Civil War’: Retired US Major General Paul Vallely

Retired U.S. Army Major General Paul Vallely is vigorously sounding the alarm against a potential communist takeover of the country and is also very concerned about the mandatory COVID vaccination of all members of the military.

Vallely asserts that there have been many adverse reactions within the force since the rollout of the vaccines, singling out the risk of blood clots and heart problems with the jabs.

“The mandatory vaccines and boosters … under Department of Defense guidance and directives to the commands throughout the Armed Forces have caused a great deal of controversy. Number one: those that declined mandatory vaccination under the First Amendment religious rights,” Vallely told The Epoch Times.

He believes that there is no need to force COVID vaccines on them, as “these are the healthiest men and women we have in the country.”

“They can take [the vaccines] as an option, but we’ve got to stop this mandatory vaccination. It’s hurting the armed forces. And of course, our enemies see that—the Russians, the Chinese, the cartels. And then [there’s] the wokeism, the teaching of critical race theory. So there are a lot of things going on that are affecting the status and the readiness of our forces right now. I’m very worried about that.”

According to U.S. Army Public Affairs, 97 percent of the active army and 88 percent of the army reserve is completely vaccinated. It also states that 2,846 exemption requests have been refused and there have been 3,330 official reprimands, as of April 13. However, an anonymous whistleblower told The Defender that the actual vaccination rates may be significantly lower.

The Army had separated 669 soldiers “for refusing the lawful order to receive the COVID-19 vaccine,” as of May 19.

He graduated from the U.S. Military Academy at West Point, and earned his commission in the Army in 1961, at the height of the Vietnam war.

“I think the Russians and the cartels and the Chinese, they’re letting us destroy ourselves from within. They don’t have to even do anything. It’s self-destruction within our own government. They see that, and of course, that makes us very, very vulnerable when we have critical race theory and ideology and what we call indoctrination, rather than putting forth the training and education that has to go on within our military,” Vallely said.

He believes that there “absolutely” is an agenda to transform the republic, that the country is being dismantled from within, and that a socialist takeover has already made substantial progress.

“When you take away to teach a critical race theory and communist ideology, you’re taking away from the time that could be used for learning how to shoot better, how to operate airplanes better, take care of airplanes through maintenance; and even within the medical corps of the armed forces, it has affected many the doctors and nurses. So it’s a terrible thing. They need to stop it right now. They need to stop enforcing the mandates,” he stated.

“This is terrible tyranny that’s going on.”

How to Stop a Communist Takeover

Despite the gloomy prospects, Vallely keeps a positive spirit and thinks that if the country is to be preserved, Americans need to awaken and act, starting at the local level—and quickly turn the tides before it’s too late.

“We have to have the sheriffs and the governors enforcing the 10th Amendment. We need to have that happen. I’m not sure that the elections are going to be fair in November.

“People have to stand up before we are led into a really bloody civil war. And that’s what it’s looking like.”

Vallely further asserted that there are “high-tech oligarchs” that, behind the scenes, want to “change the direction of this country, and they’re doing it. They’re dismantling this country. They don’t believe in our Constitution, for example they don’t care about the First Amendment or Second Amendment. They want to completely dominate the society culturally.”

Vallely is now the chairman of Stand Up America US Foundation and the Legacy National Security Advisory Group. He is a founding member of the Citizens Committee on National Security and is the founder of Nemo Arms incorporated in Boise, Idaho.

“2022 is the awakening of America. We need to wake up to see what’s happening to our country and to our government—the demolishing of our Constitution, increased burglaries, crime, and deaths within our cities. We got to enforce the law. These are all things that are on the table that must be done to turn the country around. If not, we’ll be destroyed,” Vallely concluded.