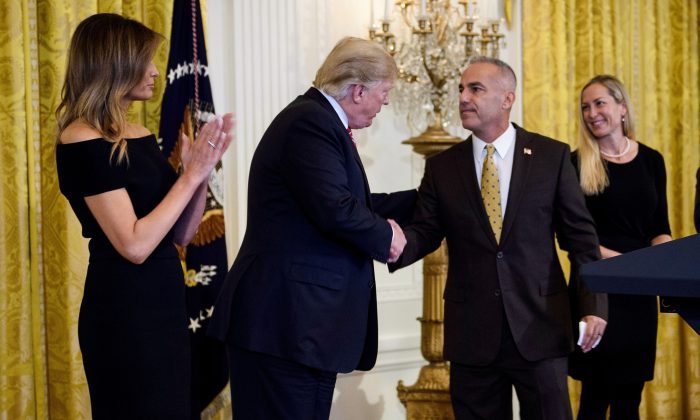 Americans need to turn off their TVs and look into President Donald Trump on their own, said Andrew Pollack, the father of Meadow Pollack, who was slain in the Feb. 14, 2018, mass shooting at Marjorie Stoneman Douglas High School in Parkland, Florida.

“Stop watching TV. Turn CNN off and do your research,” he told The Epoch Times in a phone call. “What has the president accomplished since he got into the White House?”

Since losing his 18-year-old daughter, Pollack has been an advocate for school safety, pushing to hold public officials responsible for the many actions and inaction that enabled the Parkland tragedy.

He’s also been a supporter of Trump—not just as a president, but as a person too.

“The guy is a straight shooter. I like him as a person. He has integrity and he loves his country and he’s a caring guy,” Pollack said.

The two first met on Feb. 21, 2018, when Trump flew Pollack and his family to Washington for a listening session with families of victims and survivors of the shooting. Trump sat down privately with the family for about 20 minutes. They talked about Meadow, about her brothers, about Trump’s family.

“He’s a grandpa first and a dad before he’s the president, and he was sick over the whole situation,” Pollack said.

Before the meeting, Pollack had been pondering what the president could do to help prevent similar tragedies in the future. Then, during the private meeting, he raised an idea.

“I asked him to put together a commission to look into school safety,” he said.

Three weeks later, on March 12, 2018, Trump established the Federal Commission on School Safety “to address school safety and the culture of violence” in addition to several immediate actions, such as ordering assistance programs to enable firearms training for school personnel.

The commission held a series of meetings, field visits, and listening sessions that included school safety experts, educators, and also families of victims, including Pollack.

Since then, the Pollack family met with Trump and his family four or five times, including to speak at the White House Hanukkah reception on Dec. 6, 2018, where Pollack’s rabbi led the prayer.

Trump also privately met with Pollack and his family on the backdrop of the President’s July 31 rally in Tampa, Florida, where Pollack led the Pledge of Allegiance in front of a crowd of some 10,000 people in the Florida State Fairgrounds Expo Hall.

On the other hand, Pollack didn’t have much sympathy for the media, particularly when it comes to school safety.

He remembered a meeting with Trump and other families of school shooting victims. After an hour-long discussion, Trump called on the media to ask questions.

“They asked him if he was still going to shut down the government,” Pollack said. “They didn’t care. Anything he did for school safety, for children, for teachers, the media didn’t care.”

The commission released its final report on Dec. 18, 2018, putting out over 100 recommendations that could help prevent or counter a school shooting.

The commission said it supported training school staff and faculty to carry firearms on school grounds, saying it could be a cost-effective way of providing the protection that a school safety officer would without having to hire one. Having trained, armed personnel in the school trumps law enforcement intervention, since most school shootings are done in several minutes, beating the usual law enforcement response time.

Pollack agrees. He also supports the use of security dogs trained to take down shooters.

He emphasized that school safety needs a non-partisan approach, criticizing people who “can’t differentiate school safety with the gun debate” and who, in his view, fall into the idea that “we can’t get anything done.”

On the one-year anniversary of the Parkland shooting, Pollack gave a shoutout to Trump on Twitter:

“You’ll never get the full story from the media, but since the moment I lost my beautiful princess last year in Parkland, President @realDonaldTrump has been gracious & 110% supportive of my family. Anytime I’ve asked for help, he has delivered. GREAT President!”

“Thank you, Andrew,” Trump replied. “We all miss beautiful Meadow!”