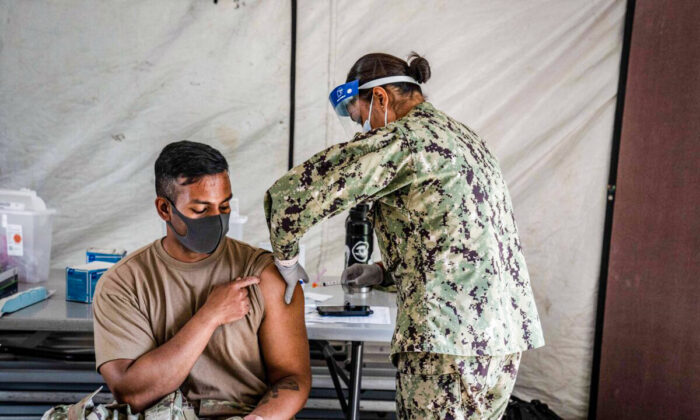 A member of the U.S. military receives the Moderna COVID-19 vaccine at Camp Foster in Ginowan, Japan, on April 28, 2021. (Carl Court/Getty Images)
By J.M. Phelps

About 20 years ago, attorney and former Marine Corps Capt. Dale Saran defended service members involved in a fight against the Pentagon’s mandatory anthrax vaccination program. While Saran lost the case in military court, the case eventually made its way to a federal court, which issued a permanent injunction in 2004, bringing the mandatory anthrax vaccination program to an end.

Now he’s come to the legal defense of troops in their fight against the U.S. military’s COVID-19 vaccine mandate.

On May 23, Saran filed a lawsuit in the Eastern District of Texas, alleging that the Pentagon’s vaccine mandate issued by Secretary of Defense Lloyd Austin on Aug. 24, 2021, is unconstitutional and therefore unlawful.

He told The Epoch Times the lawsuit was filed “more pointedly against the Federal Drug Administration’s [FDA] choice to illegally ignore the Public Health Service Act,” specifically 42 U.S.C. § 262 governing the regulation of biologics—which includes viruses or vaccines “applicable to the prevention, treatment, or cure of a disease or condition of human beings.”

“The heart of the claim is that these are not vaccines,” Saran told The Epoch Times. “They don’t have any live virus in them; the only thing that makes them even remotely related to a vaccine is the route of administration—a shot through a needle.”

Without the presence of a live virus, the COVID-19 vaccines are nothing more than “gene therapies”—whether they are licensed or not, Saran said. “And a therapy, even a life-saving therapy, cannot be mandated under U.S. constitutional law, at least as it stands right now.”

Saran’s filing argues that because the COVID-19 shots aren’t vaccines, the right to refuse treatment is constitutionally protected as a “fundamental right.” Therefore, the strict scrutiny test applies, meaning the mandate is narrowly tailored to meet a compelling interest—but neither exists, because the mandate doesn’t narrowly consider each service member’s factors of risk, and the vaccine is no longer effective against the newer variants, the filing contends.

“These are experimental treatments, [but] people have been hypnotized and propagandized into believing they are vaccines,” he said.

He said a legitimate vaccine requires exposing the “body to the virus, or a relative of the virus, that you’re trying to inoculate against, to develop immunity to it.”

The filing noted that the Centers for Disease Control and Prevention “intentionally changed its own definitions of ‘vaccine’ and ‘vaccinations’ overnight on Sept. 1, 2021, to eliminate the word ‘immunity’”—“the entire point of a vaccination as a public health measure.”

Saran added that COVID-19 vaccines don’t stop the transmission of the virus, thus “the entire logic of a mandate falls apart.” Furthermore, if it doesn’t provide sterilized immunity or prevent it from being transmitted to others, he said that “there’s no possible justification for treating the unvaccinated—including those with natural immunity—any differently than the vaccinated.”

Currently, there are approximately 550 plaintiffs, which Saran expects to increase. The initial filing was drafted and submitted because “people needed immediate relief and somebody needed to try to stop the train, [since] the military has started to get rid of people.”

If a temporary restraining order is put in place by the judge, Saran said “there will be other plaintiffs added who also deserve a fair chance to get their day in court to have their side of the argument heard.” He explained that “an amendment [to the current filing] will allow all the folks to get in the boat that didn’t get in on the first go.”

The next few weeks will include “a flurry of filings and responses from the government,” Saran said.

“[The] endgame is to shut down the whole program and get the judge to recommend a U.S. Attorney to investigate the criminality of the FDA and some of the people involved—because they know this is illegal.

“It’s time for people to stop soft-pedaling and giving credence to a therapy that’s not actually a vaccine.

“An experimental product has been wrongfully mandated [on the U.S. military],” Saran said, adding that “it’s the crime of the century, and I’m going to keep screaming about it until they tell me to shut up and sit down.”