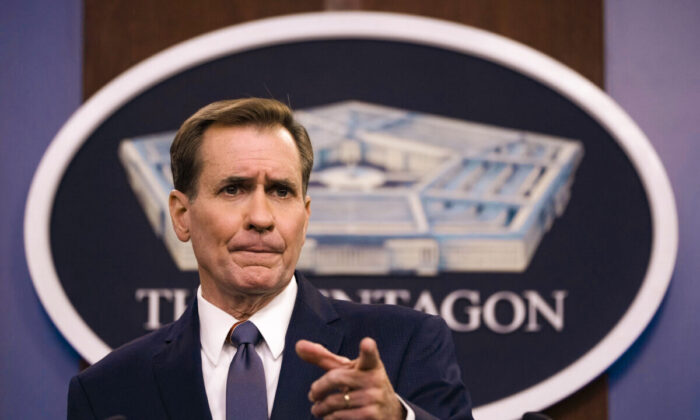 The Pentagon on Monday said it has the authority to require members of the National Guard to get vaccinated against COVID-19 after the Oklahoma National Guard’s newly appointed commander refused to impose a vaccine mandate ordered by the Defense Department.

Pentagon press secretary John Kirby told reporters that U.S. Defense Secretary Lloyd Austin “has the authorities he needs to require this vaccine across the force, including the National Guard.”

Kirby later added during a news briefing that it is “a lawful order for National Guardsmen to receive the COVID vaccine.”

“It is a lawful order,” he repeated. “Refusing to do that, absent an approved exemption, puts them in the same potential [for punishment] as active-duty members who refuse the vaccine.”

The Defense Department in September said that all uniformed personnel must be vaccinated against COVID-19, the disease caused by the CCP (Chinese Communist Party) virus, with varying deadlines for each branch.

However, on Nov. 11, the adjutant general for Oklahoma Brig. Gen. Thomas Mancino wrote in a policy memorandum ordering that “no Oklahoma Guardsmen be required to take the COVID-19 Vaccine.”

“Notwithstanding any other Federal requirement. Oklahoma Command’s will continue to process Federal vaccine waivers in accordance with DoD policy. Additionally, no negative administrative or legal action will be taken against Guardsmen who refuse the COVID-19 Vaccine,” the memo states.

Mancino added in the memo that Oklahoma Gov. J. Kevin Stitt had requested Austin for waivers of the vaccine mandate and was waiting for a decision.

Mancino had been appointed a day earlier, replacing Gen. Michael Thompson, who had pushed for members to be vaccinated, warning of consequences if they failed to do so. Mancino has been a member of the National Guard for 35 years and has served as assistant adjutant general for the Oklahoma Army National Guard since September 2019.

In his memo, Mancino stated that Stitt is the “lawful Commander in Chief” of all Oklahoma national guardsmen unless they’re federally mobilized under Title 10 of the U.S. Code.

Kirby on Monday argued that members of the National Guard would not be exempt from the department’s COVID-19 vaccine mandate under Title 32 of the U.S Code, which authorizes governors to mobilize troops within their state.

“The secretary of Defense has the authority to require these vaccines for all members of the force, including the National Guard … even in a Title 32 status,” Kirby told reporters. “Because when they’re called up for their monthly training, they’re still federally funded.”

The Epoch Times has reached out to the Pentagon for additional comment.