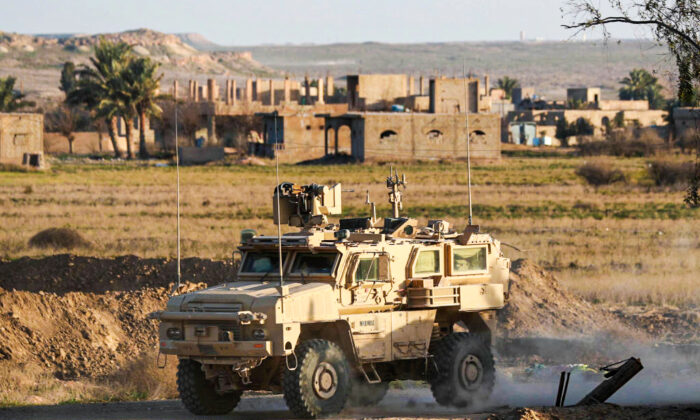 A US military vehicle drives through the Syrian village of Baghuz in the countryside of the eastern Deir Ezzor Province on Jan. 26, 2019. (Delil Souleiman/AFP/Getty Images)
US News

The renewed probe will be led by U.S. Army Forces commander Gen. Michael Garrett within a 90-day deadline.

It aims to review “reports of investigation already conducted” while simultaneously conducting “further inquiry into the facts and circumstances” of the U.S. airstrike that killed dozens of women and children, Kirby said.

The news follows an investigation published by The New York Times earlier this month, titled “How the U.S. Hid an Airstrike That Killed Dozens of Civilians in Syria.”

Its report revealed that the March 18, 2019 airstrike on ISIS in Baghouz, Syria, was carried out by a classified American special operations unit, called Task Force 9, which was in charge of ground operations in Syria, and resulted in the deaths of as many as 70 civilians.

There were mostly women and children in the region hit by the strike, the Times reported, noting that the Baghuz strike was one of the largest civilian casualty incidents of the war against the Islamic State, but it has never been publicly acknowledged by the U.S. military.

The investigation also alleged that top officers and civilian officials attempted to downplay these figures.

The probe will cover “civilian casualties that resulted from the incident, compliance with the law of war” and “whether accountability measures would be appropriate,” Kirby said.

Garrett will also be asked to recreate the timeline of the original probe into the incident after it was “stalled and stripped of any mention of the strike,” according to the Times.

It comes after Austin earlier this month said that the U.S. military was “committed” to getting right its transparency about strikes and how they are conducted.

“The American people deserve to know that we take this issue very seriously. And that we are committed to protecting civilians and getting this right both in terms of how we execute missions on their behalf and how we talk about them afterwards,” Austin said at a press briefing on Nov. 17. “And I recognize that and I’m committed to doing this in full partnership with our military leaders.”

Kirby said on Monday that Austin decided to order a new probe after being briefed on the matter by Central Command head Gen. Kenneth McKenzie earlier this month.