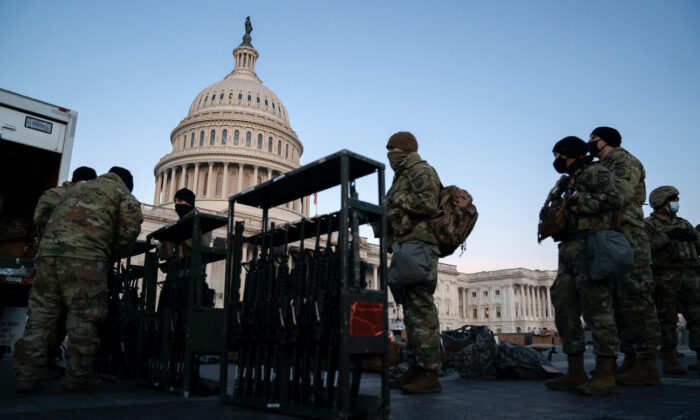 Weapons are distributed to members of the National Guard outside the U.S. Capitol in Washington, on Jan. 13, 2021. (Stefani Reynolds/Getty Images)
US News

The Pentagon offered National Guard troops two days before the Jan. 6 breach of the U.S. Capitol building, but that proposal was rejected, former chief of staff Kash Patel has confirmed.

In an episode of EpochTV’s “Kash’s Corner,” Patel, who served as chief of staff to the Acting United States Secretary of Defense under former President Donald Trump, explained why the Capitol breach could have been prevented.

Patel, who also served as a government official in the United States National Security Council and the United States House of Representatives, said that he believes that the offer from the Trump administration was blocked for “political reasons.”

“You have to ask yourself, what happened on Jan. 6? I was chief of staff on the Department of Defense on Jan. 6,” said Patel. “We had offered the Capitol Police and Mayor Bowser of Washington D.C. thousands of National Guardsmen and women two days before Jan. 6, and they turned us down. So it could have been prevented.”

Protesters have said they believe widespread fraud occurred in the election and did not like how officials in some states dramatically altered voting rules amid the COVID-19 pandemic.

There were many “mistakes” that led to the events that unfolded on that day, Patel said.

“Why on Jan. 6—when it has now been publicly admitted by the FBI that they had information that there could possibly be a situation like that at the United States Capitol—why weren’t the cabinet secretaries under [then] President Trump briefed? Why didn’t the FBI put a thousand uniformed agents around the U.S. Capitol? Where was the fence?” asked Patel.

“These are the mistakes, intentional or otherwise, that led to Jan. 6,” Patel continued. “If you look at the videos from Jan. 6, an entire side of the Capitol—and I believe it’s outside—was totally unmanned. No police officers whatsoever, and that’s where the crowd first came in through.”

He charged that the Pentagon’s offer was rejected for political reasons.

“I think people now are starting to realize that the protecting of the U.S. Capitol on a day like Jan. 6 is a law enforcement function,” Patel explained. “You cannot have the United States military descend and occupy the area around the U.S. Capitol, it’s literally illegal. But they can assist their law enforcement partners through a request from the mayor or the governor or the Capitol Police.”

“That’s what should’ve happened, and that’s what we told them they might want to consider, but they flat out rejected it for political reasons I believe.”

The U.S. Capitol Police, Mayor Muriel Bowser’s office, and the Department of Justice didn’t immediately respond to a request for comment by The Epoch Times.

More than 535 defendants across nearly 50 states have been charged in the six months since the Jan. 6 breach of the Capitol Building, the Department of Justice (DOJ) said this week. The majority of the cases are related to entering a restricted building, obstruction of an official proceeding, and civil disorder.

FBI Director Christopher Wray told an oversight hearing held by the House of Representatives Judiciary Committee last month that the law enforcement agency considered the events that unfolded on Jan. 6 to be an act of “domestic terrorism.” When asked by Rep. Eric Swalwell (D-Calif.) whether the events could be considered an “insurrection,” Wray said it would be inappropriate to describe the breach as such.

Democratic lawmakers have pushed the narrative that the Jan. 6 breach was an “insurrection,” largely during the January impeachment effort against Trump. No one who participated in the breach has been charged with insurrection.

On June 23, Indiana woman Anna Morgan-Lloyd, 49, was put on probation in the first sentencing stemming from the Jan. 6 breach.

Separately, reports of harsh conditions for pre-trial defendants have emerged in recent days. Two attorneys told NTD’s “The Nation Speaks” that more than 50 such defendants are being held pretrial in solitary confinement for 23 hours a day, in conditions that are “unconstitutional” and violate “every single basic human right.”

The FBI on Jan. 6 appealed to the public for additional information to assist in identifying 300 people who allegedly committed violent acts at the U.S. Capitol, including more than 200 who assaulted law enforcement officers.