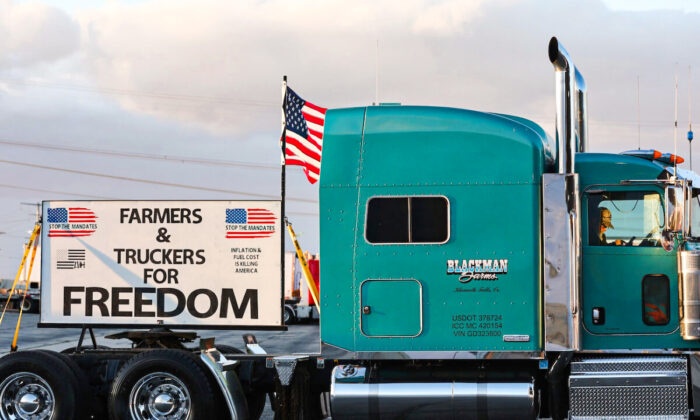 A trucker sits in his cab as truck drivers and supporters gather one day before "The People’s Convoy" departs for Washington to protest COVID-19 mandates, in Adelanto, Calif., on Feb. 22, 2022. (Mario Tama/Getty Images)
US News

Hundreds of National Guard troops will be deployed in Washington to help police deal with traffic issues related to the trucker convoy protests against pandemic restrictions that are set to start this week, officials have said.

“Our MPD and USCP partners have asked for our help in ensuring people can demonstrate peacefully and safely, and we stand ready to assist,” Maj. Gen. Sherrie L. McCandless, D.C. National Guard commanding general, said in a statement to news outlets. “The people who live, work and visit the District are part of our community, and their safety is our first mission priority.”

The approval will enable around 400 D.C. National Guard members to “provide support at designated traffic posts, provide command and control, and cover sustainment requirements,” the National Guard said in a statement.

The troops deployed to the area won’t be armed and won’t help with law enforcement or carry out domestic surveillance activities. No aircraft has been approved for use.

Austin also approved USCP’s request for assistance for up to 300 National Guard troops from outside the Washington area to help at certain traffic posts and Capitol entry points, Breitbart reported. That will begin on Feb. 26, according to Breitbart, which noted that 50 large tactical vehicles will also be placed at designated traffic posts on a 24-hour basis in the area.

A Pentagon spokesperson didn’t respond by press time to a request by The Epoch Times for comment.

Pentagon spokesman John Kirby told news outlets in a statement on Feb. 22 that the department was “analyzing a request for assistance from the U.S. Capitol Police and the DC Homeland Security and Emergency Management Agency.”

“Those agencies have asked for National Guard personnel to provide support at traffic control points in and around the District to help the USCP and D.C. government address potential challenges stemming from possible disruptions at key traffic arteries. No decisions have been made yet to approve these requests,” he added.

USCP stated recently it was planning extra security in the nation’s capital ahead of President Joe Biden’s State of the Union address on March 1, which looks set to coincide with the trucker convoy protests.

Multiple convoys are planning to descend on the Washington area in protest against COVID-19 vaccine mandates, among other issues and policies of the Biden administration.

Similar demonstrations have been held in Canada in recent weeks, prompting Prime Minister Justin Trudeau to invoke the Emergencies Act for the first time in Canada’s history, using it to freeze the bank accounts of protesters and their supporters.

Canadian politician Mark Strahl on Feb. 20 claimed that a single mom who was earning minimum wage is among those who have had their bank account frozen after she donated $50 to the Freedom Convoy.

Trudeau has accused the demonstrations of “blockading” the economy and democracy.

Bob Bolus, the organizer of one of the U.S. trucker convoys, told The Epoch Times that plans are to disrupt traffic on the Capital Beltway, a 64-mile interstate highway that encircles Washington.

“We’re going to have a shutdown,” Bolus said.

“It’s too bad if it disrupts traffic,” Bolus said. “[People] should stay home then, because it’s going to be disruptive. I don’t care if it was considered an accident on the Beltway, and traffic got backed up. It is what it’s going to be. We have every right to be on the Beltway and on every other road in the interstate system of the United States.”

However, Bolus said the convoy will be peaceful and that lanes would be kept open for emergency responders. He didn’t comment on whether or not the truckers plan to halt traffic purposely.

On Feb. 22, Washington’s mayor issued an alert to residents ahead of the trucker convoy arrival.

“Mayor [Muriel] Bowser is being briefed by public safety officials as we continue to monitor the situation closely, and our agencies remain in regular contact with their local, regional, and federal partners,” the alert said, according to a screenshot posted by Fox5DC reporter Lindsay Watts.

“Layered mitigation measures are being put in place, including some that will be visible to the public and others that are not,” the alert states. “We appreciate the approval of our D.C. National Guard traffic support request as we pull together the resources to support our public safety personnel.”