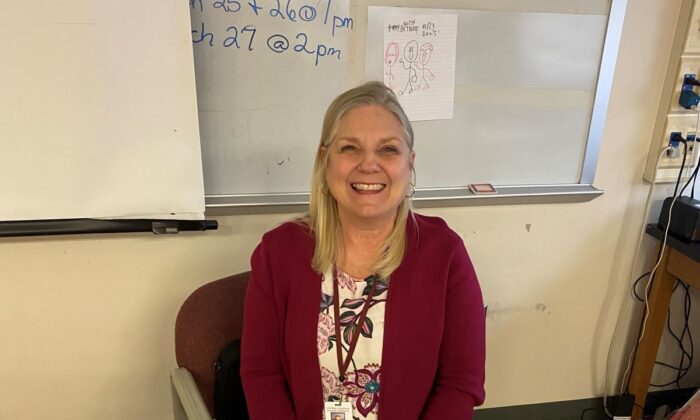 Pennsylvania history teacher Sharon Davis was suspended without pay after a discussion about standing for the Pledge of Allegiance offended some of her seventh grade students. (Courtesy of Sharon Davis)
By Beth Brelje

A Pennsylvania history teacher has been suspended without pay after a discussion about standing during the Pledge of Allegiance offended some of her 12- and 13-year-old seventh-grade students.

Every morning before classes start, students are told to “please rise” for the playing of the national anthem and the Pledge of Allegiance, which are broadcast over the loudspeaker at Central Dauphin East Middle School in Harrisburg.

It has been that way since the start of the school year, she said. It’s their free speech right to do so.

After the pledge, Davis’s homeroom class stays with her for ancient world history. She has been teaching full time at the school for 20 years.

“My question of the course is, how have ancient civilizations impacted modern-day society?” she said.

At about the time Russia invaded Ukraine in February, Davis said she thought it would be beneficial for students to examine their reasoning for not standing during the national anthem and the Pledge of Allegiance, so she talked about it occasionally over the course of several months.

Part of a Lesson

“I’ve always said to the class, ‘I understand if it’s political or religious reasons, why you’re not standing. I get that,'” Davis said.

But if they weren’t standing just out of laziness, that would be difficult to understand. She never forced them to stand, and she was aware that not all students were standing in other classrooms in the school, she said.

She told students that in Ukraine, people with differences—such as people of many different faiths or of no faith at all—united for one reason: to fight for their country. That same unity is displayed when students stand for the flag, and unity is important in the United States as well, she said.

“I said, ‘In many countries around the world, you have to pay for your education, and here in America, we get a free education,'” Davis said.

She told students that in the Middle East, women don’t have a lot of rights, and they don’t get the same education as men.

At one point, Davis separated some students who had been sitting together and talking during the national anthem and the Pledge of Allegiance. One of the students threw papers at her and grabbed things out of her hands, and another student called her a “Karen.”

The weekend after the students were separated, one student started a TikTok channel called Fire Sharon Davis, using the school’s official logo and the heading, “We are working to fire a teacher at Central Dauphin East Middle School.”

It had several videos using text.

One video’s text reads, “Help us fire a racist and homophobic teacher!”

Another video’s text reads: “Ms. Davis needs to get fired and everyone agrees. You’re lying if you say she doesn’t,” and “Ms. Davis said slurs before.”

Another reads, “Ms. Davis is just bad and not a good teacher,” and “To the students of Central Dauphin East Middle School, let’s get Ms. Davis fired. She’s racist and has said many horrible things. None of the students enjoy having her around either. She barely teaches correctly and its [sic] time that we get her fired. She needs to go.”

Davis was off work the Monday after the TikTok channel was started, the week of April 11. That Tuesday, when she returned to school, numerous students told her they were worried that she had been fired when she didn’t come to school. They shared screenshots from TikTok.

The principal talked to Davis that morning.

“She said, ‘There’s a TikTok on you.’ And she was very vague with me. She said that the administration is taking care of it,” Davis said.

The TikTok channel was soon deleted, but Davis believes there was no investigation. The school didn’t return calls from The Epoch Times requesting comment.

Davis learned who posted the content and told the principal. That student was interviewed and admitted that she posted the calls to fire Davis. When asked why she did so, the student made accusations that started an investigation and disciplinary action against Davis.

“The student stated that you had been lecturing students who were not standing for the flag and making inappropriate statements to those that did not stand for the Pledge of Allegiance,” Kathy McCool, the school’s director of human resources, wrote in a June 7 letter to Davis.

McCool said Davis’s actions may be construed as a violation of students’ free speech rights under the First Amendment of the U.S. Constitution.

The letter accused Davis of telling the principal that she wanted the student removed from the National Junior Honor Society because the student wasn’t showing citizenship by declining to stand for the flag.

“I did not single out any one student,” Davis said in a rebuttal letter. “I used the teachable moment as a starting point for class discussion. My objective was to have open discussion about why our schools ask students every morning to please rise for the pledge to the flag. … At no time did I make inappropriate comments to those who did not stand for the flag.”

“Your letter also states that I said ‘I told a student that Buddhists in Bhutan persecuted Hindus so if she lived there, she wouldn’t be able to not stand for the pledge because she would be killed.’ I did not say that, nor did I say it to one individual student,” Davis wrote. “I stated to the class that we are one of few countries that offers religious, political, and sometimes gender asylum for people who are persecuted or killed for not following their nation’s religious and political beliefs. I never had a specific or direct conversation in regard to this with an individual student during the school year.”

“A student also reported that you had asked students if they went to any religious institutions,” the letter from the school reads. “To the students who responded that they did not, you responded, ‘no wonder you do not have any morals.’ To a Muslim student, you reportedly said that if she still lived in her home country, she wouldn’t have an education, in an effort to get the student to stand for the pledge.”

Davis disputes saying that and responded that at times she does ask students to share their family traditions and cultures to learn and create a welcoming classroom environment. Her comments have been taken out of context, she said.

“The student making the posts has expressed displeasure with my class. She was upset with me when I moved her seat away from her friends for talking,” she wrote. “This occurred around the same time. One of the students who was interviewed called me a Karen. Another student who was interviewed used a racial slur in my classroom and I called his mother to have a conversation. I believe that these students simply do not like me personally or my teaching style. They commented specifically that they wanted to get me fired.

“I wonder if students who are not disgruntled were interviewed regarding these accusations against me. I believe they would represent the classroom climate which I try to create.”

Davis has many letters from students praising her teaching.

“I am concerned that a student can so easily make inflammatory comments on social media about me and my character which threaten my job, ruin my reputation, and disrupt my rapport with my students, the school, and the outside community,” she wrote. “Furthermore, I am stressed to work in an environment where I have to defend myself for every conversation or discussion that occurs in my classroom.”

The school responded on June 30 with another letter, placing Davis on unpaid administrative leave starting in August. She was teaching summer school, but had to stop because of the school’s investigation.

“In addition, unless directed to report to the district, you should exclude yourself from the buildings and grounds while this investigation is pending. You should also not initiate any contact with any staff member, students or their parents during the investigation,” the letter from the school reads. “At the conclusion of the investigation, you will be notified by the district of the outcome, at which time the district will advise you of its determination regarding your work status.”

Jeff Schott, a labor and civil rights attorney at the Scaringi Law Firm in Harrisburg, is representing Davis. He told The Epoch Times that none of Davis’s alleged conduct amounts to a violation of any rule, “except for the unspoken rule against open patriotism in Pennsylvania’s ‘woke’ public school system.”

“In no way were the students’ free speech rights not to stand or recite the pledge infringed upon by the teacher’s explanation of why she believes the flag should be respected,” Schott said. “To the contrary, Sharon’s free speech rights were completely trampled by the school district, which has suspended her for expressing her views on matters of public importance and inviting debate as one would expect and hope for from a Social Studies teacher. Ms. Davis should be reinstated immediately with no loss in pay or benefits.”

Davis said she feels like the school district doesn’t value her as a human or as a teacher. She has started a GoFundMe account to pay for legal fees to save her job.