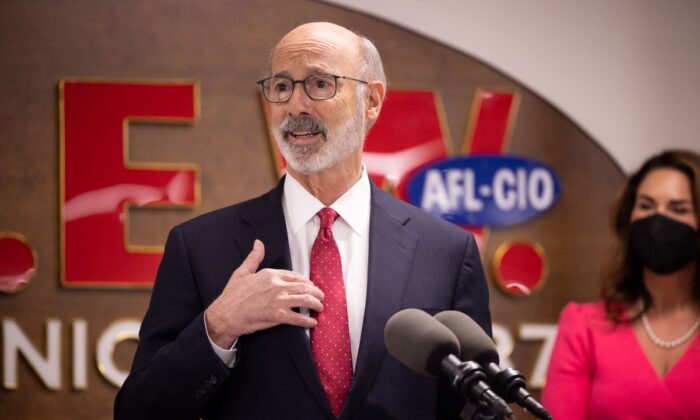 The Supreme Court of Pennsylvania, divided along partisan lines, upheld the state’s 2019 mail-in voting law in a 5–2 decision on Aug. 2, which means that current mail-in balloting rules will probably remain in place for the upcoming Nov. 8 general election.

The decision overturned a lower court ruling that had found that the mail-in voting law ran afoul of the Pennsylvania Constitution.

Pennsylvania Gov. Tom Wolf, a Democrat, hailed the ruling which he said “definitively asserts that mail-in voting is a legal and constitutional method for Pennsylvania voters.”

“Voting is a fundamental right—a right that we should ensure is accessible for all voters,” Wolf said in a statement. “Mail-in voting is a safe, secure, and legal option for Pennsylvania voters to exercise that right. I will continue to advocate for voting reforms that remove barriers and increase access to voting.”

The case goes back to 2019, when the Pennsylvania General Assembly passed Act 77, which, among other things, amended the state’s election code to create universal no-excuse mail-in voting statewide. Before the act, voters had to establish that they fit the criteria of an absentee voter before being able to cast a ballot by mail. The legislation easily passed the state House of Representatives 138–61 and the state Senate 35–14.

When the COVID-19 pandemic arrived in Pennsylvania months later, voters, especially Democrats, took advantage of the law’s stay-at-home voting provisions. In the 2020 presidential election, Democrat Joe Biden beat Republican Donald Trump by more than 3–1 among mail-in ballots, while Trump prevailed over Biden by 2–1 in votes cast in person on Election Day, according to a summary in the new court opinion.

The Pennsylvania Supreme Court stepped in and found that the challengers had waited too long to bring their lawsuit and threw out the lower court’s injunction. The candidates then asked the U.S. Supreme Court to intervene, and it refused to do so. The case returned to the Commonwealth Court, which ruled 3–2 that the mail-in voting provision violated the state constitution.

The Pennsylvania Supreme Court heard oral arguments in the case on March 8 and issued its ruling on Aug. 2, reversing the lower court.

“We find no restriction in our Constitution on the General Assembly’s ability to create universal mail-in voting,” Donohue wrote (pdf).

“More than one hundred years ago, this Court recognized that our Constitution mandates that elections be free and equal, but that ‘the power to regulate elections is a legislative one, [which] has been exercised by the General Assembly since the foundation of the government.’”

The General Assembly didn’t overstep “the bounds of this power” when enacting the universal mail-in voting provision, she said.

The Republicans who brought the legal challenge are expected to appeal the ruling.