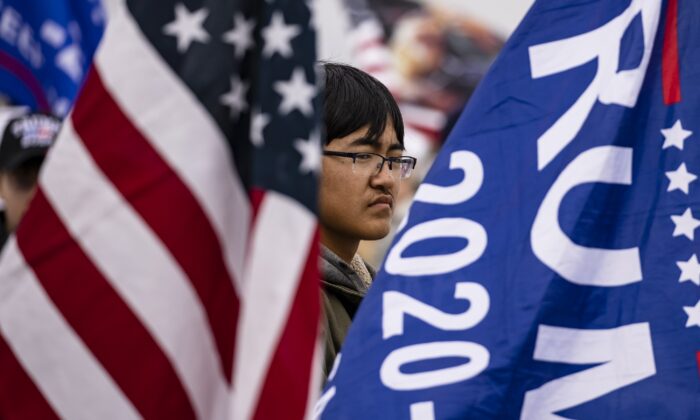 Supporters of President Donald Trump gather outside of the Wyndham Gettysburg hotel prior to a Pennsylvania Senate Majority Policy Committee public hearing to discuss the 2020 election issues and irregularities, in Gettysburg, Pa., on Nov. 25, 2020. (Samuel Corum/Getty Images)
By Zachary Stieber

A growing body of evidence shows the presidential election in Pennsylvania was compromised, a state senator said Saturday.

“There is mounting evidence that the PA presidential election was compromised. If this is the case, under Article II, Section 1.2 of the U.S. Constitution, the state legislature has the sole authority to direct the manner of selecting delegates to the Electoral College,” state Sen. Doug Mastriano, a Republican, said on Twitter.

“This power was given to the state legislature for the purpose of safeguarding the appointment of our president, specifically contemplating corruption and ensuring that the people are not disenfranchised through a corrupt election process,” he added. “Therefore, we are introducing a resolution to exercise our obligation and authority to appoint delegates to the Electoral College.”

Mastriano and other state lawmakers announced Friday they will soon introduce a resolution to dispute the results of the election, alleging that “documented irregularities and improprieties associated with mail-in balloting, pre-canvassing, and canvassing have undermined our elector process and as a result we cannot accept certification of the results in statewide races.”

The resolution calls on the Pennsylvania House of Representatives to recognize the alleged irregularities and improprieties and disapprove of what lawmakers describe as the infringement on the General Assembly’s authority to regulate elections.

Pennsylvania Secretary of State Kathy Boockvar extended the mail ballot deadline without permission from the legislature. The U.S. Supreme Court earlier this month ordered Pennsylvania election officials to separate ballots that arrived after the previously-scheduled deadline up to the extended one while justices weigh whether the action was legal.

Pennsylvania lawmakers also said in the resolution they disapprove and disagree with the certification of election results, calling it “premature,” and want Boockvar and Gov. Tom Wolf, a Democrat, to withdraw or vacate the certification. And they called on the U.S. Congress “to declare the selection of presidential electors in this commonwealth to be in dispute.”

Republicans control the House and Senate in Pennsylvania but it’s not clear if they have enough support to pass the resolution. Twenty-six of the House’s 203 members are co-sponsoring the resolution so far.

Mastriano has said the legislature is trying to claim its power to appoint the state’s electors to the Electoral College, an unusual mechanism that’s rarely been triggered in U.S. history. “We have a fight on our hands and we’re gonna fight. We’re gonna take the fight all the way to the Supreme Court if we have to,” he said.

Trump wrote on Twitter early Saturday that he “won Pennsylvania by a lot, perhaps more than anyone will ever know,” calling the election “RIGGED.” The current results show Democratic presidential nominee Biden won. Biden’s campaign has dismissed allegations of election fraud.

In a separate matter, a judge on Friday said Republicans who filed a lawsuit challenging a mail-in voting law passed last year will likely succeed.

“Petitioners appear to have established a likelihood to succeed on the merits because petitioners have asserted the Constitution does not provide a mechanism for the legislature to allow for expansion of absentee voting without a constitutional amendment,” Commonwealth Judge Patricia McCullough, who blocked the certification of Pennsylvania’s election results, wrote in her ruling.