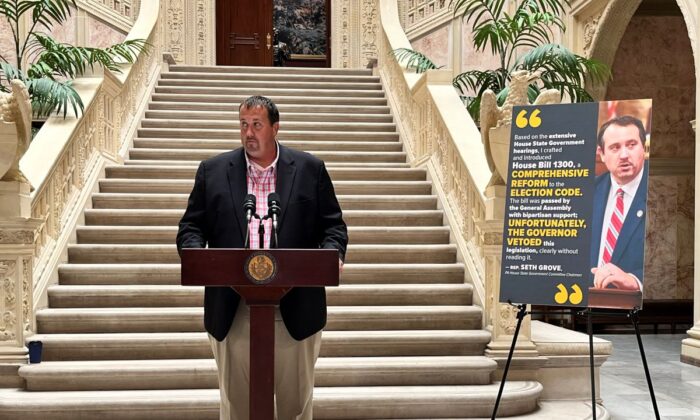 More than two months after Pennsylvania’s May 17 primary election, the Department of State still hasn’t certified the election results. It’s an administrative failure that undermines confidence in the state’s election system, according to Republican state Rep. Seth Grove, chairman of the State Government Committee.

That’s one of the numerous examples described by Grove at the state Capitol building in Harrisburg during a July 19 press conference at which he released a 186-page report (pdf) with the long title, “Election Reform in Pennsylvania: Missed Opportunities and Continued Chaos—An Interim Report on the Status of Elections in the Commonwealth of Pennsylvania After the Veto of House Bill 1300.”

Grove is still advocating for something such as HB 1300, which Gov. Tom Wolf vetoed in June 2021. It was a package of election measures that called for voter identification and provided for early, in-person voting; moved the voter registration deadline to 30 days from 15 days before an election; established a state bureau of election audits; allowed for pre-canvassing of mailed ballots; and would have made it easier for older and disabled voters by moving them to the front of the line or providing curbside voting so they could remain in their car.

But Wolf didn’t go for it.

“This bill is ultimately not about improving access to voting or election security, but about restricting the freedom to vote,” Wolf said in a statement about the veto. “If adopted, it would threaten to disrupt election administration, undermine faith in government, and invite costly, time-consuming, and destabilizing litigation.”

It didn’t seem like the governor read the bill, Grove said in his report.

“Unfortunately, Governor Wolf vetoed the bill despite seeming largely unfamiliar with the contents,” Grove stated. “By vetoing the legislation, he made himself the sole obstacle to historic reform that would have improved nearly every aspect of election administration in Pennsylvania.

“Most importantly, it would have allowed the General Assembly to live up to our constitutional requirement for uniformity and fairness in elections and prevent any reoccurrence of the national attention our current, broken process received during and after the November 2020 election.”

Incidents From the Report

The report details troubles in the state’s elections that have happened since 2020. The following incidents are a sampling of those described in more detail in the report:

In 2021, a Luzerne County man admitted to using his deceased mother’s information to apply for an absentee ballot.

During the May 2021 primary, some counties faced a shortage of paper ballots at polling places on the day of the election, in part due to higher-than-expected in-person voting. Shortages occurred in Clearfield, Delaware, Lebanon, and York counties, and possibly others.

In Fayette County during the same election, an issue with barcodes meant that ballots weren’t scanning or being recorded. Affected ballots were set aside and counted by hand when polls closed.

In the same election, the Lehigh County Board of Elections decided to count undated ballots. In response, members of the House Republican Caucus issued a letter threatening impeachment unless the law was followed. The matter resulted in litigation in federal courts, with the 3rd Circuit Court of Appeals ordering the undated ballots to be counted.

That wasn’t the last of ballot issues.

Another case in federal district court challenged the practice of disqualifying ballots lacking a secrecy envelope. The case isn’t yet resolved.

And recently, the Department of State filed suit against the Berks, Lancaster, and Fayette county boards of elections over certification disputes arising from the 2022 primary election. At issue is the treatment of ballots lacking a date. These counties certified results excluding such ballots, as required by Pennsylvania law.

When the 3rd Circuit Court of Appeals issued its decision about undated ballots in the May 2021 primary, the Pennsylvania Department of State ordered Berks, Lancaster, and Fayette counties to certify an updated election result including the count of any ballots previously rejected for lacking a date.

The three counties didn’t do so, claiming that the previous court decision applied only to that case, and that the election code doesn’t provide for election results to be certified a second time.

The case remains in Commonwealth Court, which is holding up certification of the 2022 primary election.

Grove called on the governor and his fellow lawmakers to try again on election reform legislation.

“It is my hope all sides and stakeholders can come to the table to compromise and bring true and meaningful election reform to Pennsylvania voters,” he said in a statement. “House Republicans have stood, and still stand, ready to address the myriad of election issues urgently in need of correction.”