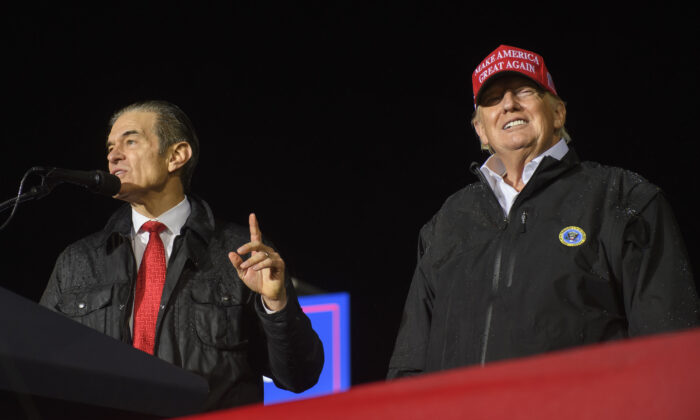 The polls opened on May 17 for the closely-watched primary elections for the U.S. Senate and the governor’s seat in Pennsylvania.

Pennsylvania Gov. Tom Wolf (D) is term-limited, and Sen. Pat Toomey (R) is retiring. Voters in the Keystone State will determine who meets in the general election to fill the seats.

In the U.S. Senate race, the Donald Trump-endorsed celebrity doctor Mehmet Oz has spent $12 million of his own funds on the campaign. Hedge fund executive and former U.S. Treasury Department official David McCormick has poured $11 million into the hotly contested race.

Kathy Barnette, a U.S. Army Reserves veteran, and commentator, has operated her quest to become Pennsylvania’s next U.S. Senator on a shoestring budget after raising $1.7 million. In May, she emerged as a contender to Oz and McCormick.

Her ascent in the race is attributed to a powerful personal life story that includes a personal climb out of poverty, being a child conceived from rape, which has shaped her staunch pro-life stance. Barnette has picked up support from conservative groups, including the well-funded Club for Growth Action super PAC.

In a new Emerson College poll released on May 16, Barnette tallied 24 percent support, with Oz leading with 28 percent and McCormick with 21 percent support.

According to the survey, 15 percent are undecided.

When undecided voters who lean toward a specific candidate are included in the poll, Oz is in first place with 32 percent, followed by Barnette with 27 percent and McCormick at 26 percent.

“Kathy Barnette will never be able to win the general election against the radical left Democrats,” Trump said in a statement. “Dr. Oz is the only one who will be able to easily defeat the crazed, lunatic Democrat in Pennsylvania. A vote for anyone else in the primary is a vote against victory in the fall!”

Barnette carries political baggage that will drag her down, Trump said, before adding that he would support her in the future when the current Pennsylvania U.S. Senate race is over.

“She has many things in her past, which have not been properly explained or vetted, but if she is able to do so, she will have a wonderful future in the Republican Party—and I will be behind her all the way,” Trump said.

Barnette has been criticized for homophobic and Islamophobic tweets posted in previous years, including some calling Barack Obama a Muslim.

“It’s reprehensible that she would tweet out something that is defamatory to an entire religion,” Oz told The Associated Press. “This state was based on religious freedom. I’m proud as a Pennsylvanian to uphold those founding beliefs that every faith has its merits.”

The reason Barnette has jumped in the polls, she said, is her emphasis on “real issues.”

“That is the reason why I’m surging and doing so well,” she said. “The American people, specifically Pennsylvanians, are going to prioritize their kitchen-table issues above a lot of the noise we are hearing right now.”

If she wins on May 17 and then in the general election, Barnette would be the first Republican black woman elected to the U.S. Senate.

Club for Growth Action placed a $2 million order for spots praising Barnette, calling her “a principled conservative and a fighter who will take on the socialists.”

McCormick attended West Point, served in the U.S. Army, and earned a Bronze Star during the first Gulf War. He is confident about what will happen on May 17.

“I think we’re going to have a big turnout, and right now, what the voters are focused on in the primary is: who is the candidate that shares my conservative values and is going to fight for those in Washington,” McCormick said.

“The second question is: who can win this general election?

“The stakes are so high because it determines not only Pennyslvania but the direction of the country. And then, three: who can show up on day one with the experience to deal with the crisis we’re in—Ukraine, China, the open borders,” he added.

The GOP primary winner will likely face Lt. Gov. John Fetterman, who has a sizable lead in the Democratic party primary polling.

On May 15, Fetterman revealed that he suffered a stroke on May 13.

“On Friday, I wasn’t feeling well, so I went to the hospital to get checked out,” Fetterman said. “The good news is I’m feeling much better, and the doctors tell me I didn’t suffer any cognitive damage. I’m well on my way to a full recovery.”

Fetterman is recovering in a Lancaster hospital. He says he will remain in the Senate race. U.S. Rep. Conor Lamb and state Rep. Malcolm Kenyatta are his opponents.

“Our campaign isn’t slowing down one bit, and we are still on track to win this primary on Tuesday, and flip this Senate seat in November,” Fetterman said.

“The doctors have assured me that I’ll be able to get back on the trail, but first I need to take a minute, get some rest, and recover,” Fetterman added. “There’s so much at stake in this race, and I’m going to be ready for the hard fight ahead.”

In the GOP gubernatorial primary, state Sen. Doug Mastriano owns a comfortable advantage in polling and received an endorsement from Trump on May 14.

Trump describes Mastriano as “a man who will never let you down” and called him “a fighter like few others who has been with me right from the beginning, and now I have an obligation to be with him.”

Mastriano said the honor of getting Trump’s backing is “not for me—it’s for the millions of hard-working Pennsylvanians who want their individual liberties restored, power returned to the people, and for their elected leaders to fulfill the America First—and Pennsylvania First—agenda.”

Pennsylvania Attorney General Josh Shapiro is running unopposed in the Democratic primary. He is well-funded and the general election is projected to be competitive.

Shapiro is already anticipating Mastriano as his opponent. He is airing television spots comparing Mastriano to Trump and asking Pennsylvanians if they really want another Trump.