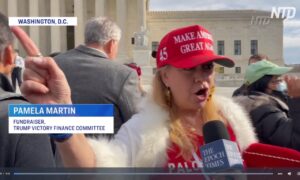 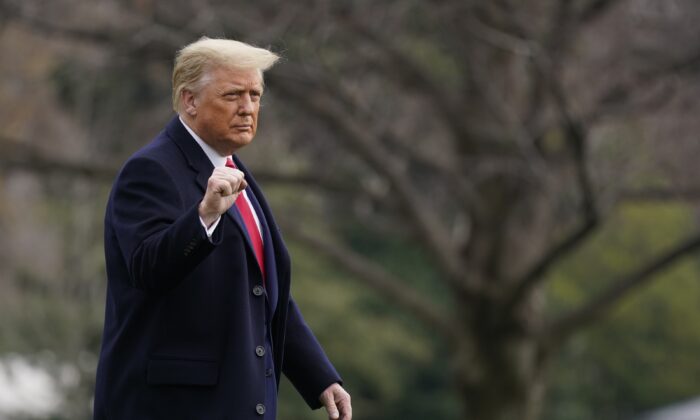 President Donald Trump gestures as he walks on the South Lawn of the White House, on Dec. 12, 2020. (Patrick Semansky/AP Photo)
Battleground States

Republican electors in four states said on Dec. 14 that they would cast their procedural votes for President Donald Trump and Vice President Mike Pence, the latest update contesting the results of the 2020 election.

Republican electors in Pennsylvania, Georgia, Nevada, Arizona all said they voted for Trump. It comes as their states formally appointed Democratic electors who voted for Democrat Joe Biden and Sen. Kamala Harris (D-Calif.).

In Michigan, two separate slates of electors were cast: 16 for Trump and 16 for Biden.

“Sending more than one slate of electors is not unheard of,” said Meshawn Maddock, Michigan Republican at-large national elector in an emailed release. “It’s our duty to the people of Michigan and to the U.S. Constitution to send another slate of electors if the election is in controversy or dispute—and clearly it is.”

The Pennsylvania GOP said in a news release that electors met in Harrisburg to “cast a conditional vote” for Trump and Pence “at the request of the Trump campaign.” Their vote comes as Democratic electors cast their Electoral College votes for Biden and Harris.

The Pennsylvania GOP cited the 1960 presidential election between Richard Nixon and John F. Kennedy, who would become the eventual winner.

“We took this procedural vote to preserve any legal claims that may be preserved going forward,” said Pennsylvania Trump campaign chairman Bernie Comfort in a statement.

In Georgia, David Shafer, the chairman of the state’s Republican Party, said that GOP electors made their move today because the “President’s lawsuit contesting the Georgia election is still pending.”

“The Republican nominees for Presidential Elector met today at noon at the State Capitol today and cast their votes for President and Vice President,” Shafer said in a Twitter post. “Had we not meet today and cast our votes, the President’s pending election contest would have been effectively mooted. Our action today preserves his rights under Georgia law.”

The same thing was done in Nevada, with the state’s Republican electors casting their vote for Trump and Pence. In a Twitter post by the Nevada GOP, they stated, “History made today.”

The Electoral College votes are cast on Dec. 14 and counted on Jan. 6 during a Joint Session of Congress, when the House of Representatives and Senate meet.

After states have completed their vote counts and gathered the official results, “the U.S. Code (3 U.S.C. Section 6) requires the state governors to prepare, ‘as soon as practicable,’ documents known as Certificates of Ascertainment of the vote.”

“Certificates of Ascertainment, which are often signed by state governors, must carry the seal of the state. One copy is forwarded to the Archivist of the United States, while six duplicates of the Certificate of Ascertainment must be provided to the electors by December 14, the date on which they meet.”

According to the U.S. Code, when the House and Senate meet, they have to look into “all the certificates and papers purporting to be certificates of the electoral votes.” Several Republican members of Congress have said they would attempt to object to the counting of the Electoral College votes for a state, which would then trigger a series of debates and votes.

White House adviser Stephen Miller told Fox News on Dec. 14 that alternate groups of electors were being chosen in several states, claiming that it would lead to Trump’s reelection.

“The only date in the Constitution is Jan. 20. So we have more than enough time to right the wrong of this fraudulent election result and certify Donald Trump as the winner of the election,” Miller said on “Fox & Friends,” referring to Inauguration Day.

It’s unclear if legislators certified the results in these states. The Epoch Times has reached out to the Republican majority leaders in these states but did not immediately get a response.

States with close contests between Trump and his rival Biden were expected to potentially produce competing slates of electors, one certified by the governor and the other by the legislature.

It is unclear if all of the Republican electors in the five states were formally certified. Either way, Congress is likely to end up with competing slates of electors come Jan. 6, when the two chambers are scheduled to count the votes. While a process exists to resolve disputes between duelling electors, it has never been tested in the courts.

Approving a set of electors would require the majority in both chambers. The balance of power in the Senate will be determined by the results of the two runoff elections in Georgia. Should Democrats win both seats, a 50-50 tie in the Senate would hand the tiebreaker vote to the vice president.

If lawmakers cannot agree on a set of electors, the country will find itself in uncharted territory, which may prompt intervention from the Supreme Court. If history is a guide, the state delegations in the House may have to pick a president. Republicans have the majority of delegations.