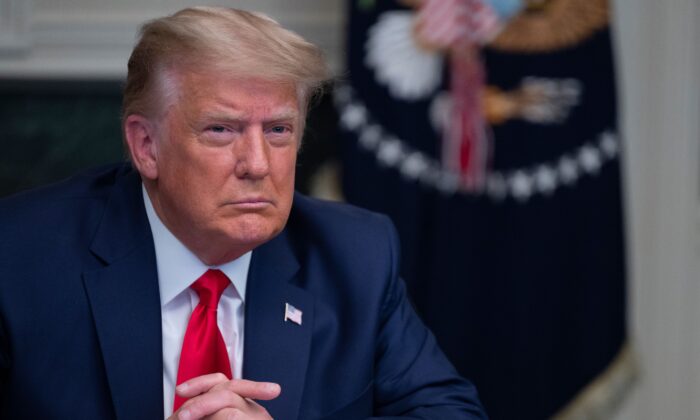 President Donald Trump participates in a Thanksgiving teleconference with members of the United States military, at the White House in Washington on Nov. 26, 2020. (Andrew Caballero-Reynolds/AFP via Getty Images)
By Jack Phillips

The U.S. Third Circuit of Appeals in Pennsylvania on Friday rejected President Donald Trump’s campaign appeal in their challenge of the state’s election results, a move that Trump’s lawyers said will allow them to expedite their lawsuits to the U.S. Supreme Court.

“The activist judicial machinery in Pennsylvania continues to cover up the allegations of massive fraud. We are very thankful to have had the opportunity to present proof and the facts to the [Pennsylvania] state legislature,” Trump lawyers Jenna Ellis and former New York City Mayor Rudy Giuliani wrote in response.

“On to SCOTUS!” they wrote, referring to the Supreme Court.

The Third Circuit Court of Appeals wrote that the Trump campaign’s challenge doesn’t have merit, saying that “voters, not lawyers, choose the President. Ballots, not briefs, decide elections. The ballots here are governed by Pennsylvania election law.”

“No federal law requires poll watchers or specifies where they must live or how close they may stand when votes are counted. Nor does federal law govern whether to count ballots with minor state-law defects or let voters cure those defects. Those are all issues of state law, not ones that we can hear. And earlier lawsuits have rejected those claims,” wrote the three-judge panel (pdf).

The court also asserted that Trump’s legal team did not provide evidence of their claims of fraud.

Earlier this week, the Trump campaign asked the appeals court to review a lower court decision that rejected their request to amend their claims in another complaint. They also asked the court for an injunction to block Pennsylvania’s certification of its votes.

Trump’s lawsuit argued that mail-in ballots were handled separately in counties that leaned heavily Democratic, in contrast with counties that leaned Republican. Trump’s campaign also said that some GOP poll observers were blocked from watching vote-tabulation efforts and could not witness the process or, more importantly, contest any alleged fraud or irregularities. In a hearing this week in front of GOP state senators in Pennsylvania, several witnesses, including one in Philadelphia, said that election officials forced them to stand sometimes as much as 200 feet away from the vote-counting.

A district court judge on Nov. 21 dismissed the campaign’s lawsuit, ruling that the lawsuit had “strained legal arguments without merit and speculative accusations.”

The Third Court in their Friday ruling rejected both requests, saying that they saw no evidence that vote counting was carried out improperly or fraudulently.

“The Campaign tries to repackage these state-law claims as unconstitutional discrimination. Yet its allegations are vague and conclusory,” the court found.

It also said that the remedy the campaign had asked for was “grossly disproportionate” to the challenge raised.

“Tossing out millions of mail-in ballots would be drastic and unprecedented, disenfranchising a huge swath of the electorate and upsetting all down-ballot races too,” the judges ruled.

Ellis and Giuliani have both previously stipulated that they want to take their lawsuits to the Supreme Court.

In their Pennsylvania hearing, both Ellis and Giuliani suggested to the GOP state senators that they should vote against certifying the results of the election in the Keystone State, which has 20 Electoral College votes. It came as numerous witnesses were called to speak in front of the officials, alleging significant irregularities and security lapses in various areas.

For example, Greg Stenstrom, who, besides being a poll watcher, said he’s an expert in security fraud, told the senators that they saw numerous violations, including how mail-in ballots were handled in Delaware County. In one situation, he said that data on USB cards were uploaded to voting machines by a warehouse supervisor without being observed by a poll watcher, which he said he saw happen at least 24 times.