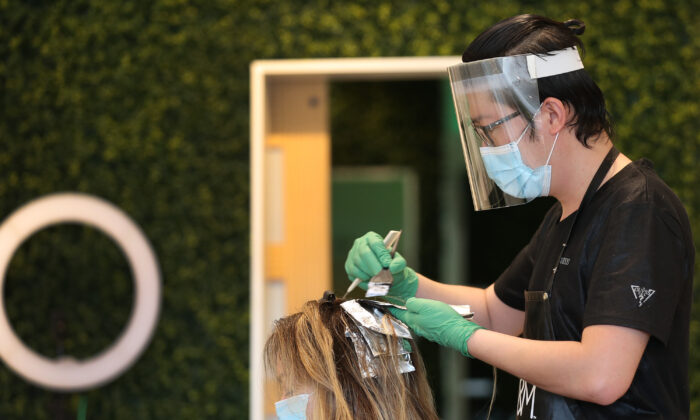 Pennsylvania’s Auditor General Timothy DeFoor’s audit provides a window into the process of Gov. Tom Wolf’s administration as it shuttered thousands of businesses.

“This audit revealed a flawed process that provided inconsistent answers to business owners and caused confusion,” DeFoor said in a Sept. 14 statement. “While the pandemic certainly presented some unique challenges, the process was hastily assembled on the fly, unevenly administered and should be reformed before anything like it is ever used again.”

On March 19, 2020, Wolf released a list of businesses considered “life-sustaining,” and ordered all other businesses to be closed to help slow the spread of COVID-19.

Businesses could ask to remain open by applying for a waiver from the Department of Community and Economic Development (DCED).

During that time, DCED posted online five different versions of the waiver request form for businesses to use, the audit stated.

Of the applications submitted, one-third, 14,168, were from businesses that didn’t even require a waiver to remain open because they provided goods or services already declared life-sustaining. The fact that they applied for a waiver illustrates the frustration and confusion businesses experienced, the audit stated.

To determine which businesses to close, the federal government gave the state guidance that considered essential workers as those critical for protecting public health and safety, and also considered those supporting economic and national security as essential. The guidance amounted to 14 sectors with essential critical infrastructure workers in each sector.

The Wolf administration built a more complex system to consider a business’s life-sustaining or non-life-sustaining qualities. It listed 10 industries, 19 sectors, 105 subsectors, and 306 industry groups, with exceptions for certain types of businesses.

Once waiver applications started to arrive, DCED asked employees, who were working from home and given no formal training, to work as reviewers and decide if a business should get a waiver or remain closed.

For example, massage businesses were closed, but some received waivers because they provided massages for essential health care workers. Pet groomers were closed but those that sold pet food could keep the food part of their business open.

Pennsylvania residents were going out of state to buy cars, the audit stated. A Pennsylvania nurse whose car was wrecked in a crash had to go to Ohio to get a new vehicle.

“The restriction on automobile sales not only adversely affected Pennsylvania automobile dealerships, but it resulted in Pennsylvania residents being forced to travel out of state to purchase a vehicle necessary to travel to their critical jobs during a time when residents were being asked to limit travel in order to limit the spread of the virus,” the audit stated.

“The shutdown came as a surprise to everyone,” Daniel Durden, chief executive officer of the Pennsylvania Builders Association, told The Epoch Times. “There was so little time to button up job sites, to protect buildings from being damaged or being a danger to people in the neighborhood who may wander into a construction site.”

The waiver process looked like an opportunity to work within the shutdown, Durden said, but home builders found inconsistency when they applied for waivers.

“We had members share waiver applications that worked. Others used identical language; sometimes it worked, sometimes it didn’t,” Durden said.

Often a builder would be rejected for the waiver but the contractor who was going to do the work would be approved. The main contractor couldn’t open the worksite, leaving them both out of work.

“If you can’t line up your subcontractors in the order the work needs to be done, not only will it take longer to build the home, it will cost you a lot more money,” Durden said. “Builders operating without a lot of reserves when the shutdown occurred went out of business.”

The audit was based on a sampling of 150 waiver applications. In the sample, four businesses were allowed to remain open that should have been closed; two were told to close that didn’t need a waiver to remain open; two were told they didn’t need a waiver but were later incorrectly told to close; and three received no decision but were sent an unrelated letter.

“The results of these decision errors by reviewers had real life negative consequences to businesses that should have been able to operate but instead were notified that they had to close,” the audit stated.

Other issues with the waiver application and review processes identified by the performance audit included:

The audit was given to DCED before it was made public, and a letter from DCED Secretary Dennis Davin is attached to the end of the audit.

The waiver requests DCED received ranged from “heartfelt and often heart wrenching individuals pleas from small business owners to keep their struggling businesses open, to requests from multinational corporate entities represented by legal counsel,” Davin wrote. “This diversity presented a unique set of challenges for making consistent determinations as to which businesses could remain open because they were life-sustaining and which businesses, unfortunately, had to remain closed to protect public health.”

“The DCED appreciates the feedback provided by the Auditor General on the business exemption process undertaken at the height of the COVID-19 pandemic,” DCED Communications Director Casey Smith told The Epoch Times in an email.

“The Wolf Administration prides itself on transparency, and this audit reinforces what we have said time and time again-this situation was unprecedented and DCED is proud of the work accomplished by our team in an incredibly short time period,” Smith wrote.

“The public can be assured that every decision was made in a professional manner. We thank the auditor general’s team for their review and feedback of the business exemption process and for reassuring the public that all decisions were made in a fair, professional, and transparent manner.”