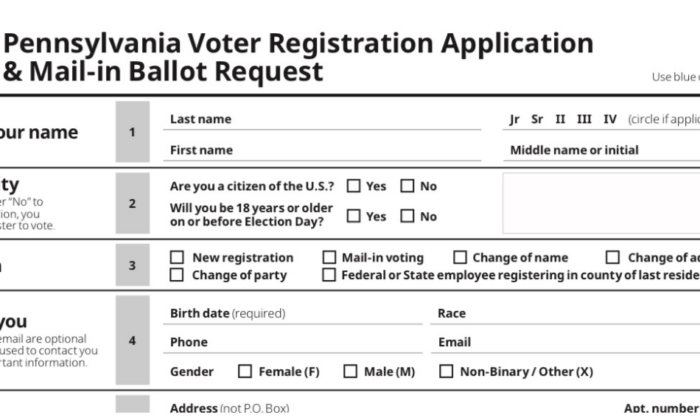 In the middle of the election cycle, the Pennsylvania Department of State has suddenly changed its voter registration application form to include a mail-in ballot application.

The applications used to be on separate forms, but this seemingly small clerical change is creating logistical headaches for county election directors and causing voter confusion.

Registering to vote and seeking a mail-in ballot are two different actions requiring different responses in the county election offices.

“We use the voter registration application for one thing, we use a mail-in ballot application for something different,” Christa Miller, Lancaster County’s election director, told The Epoch Times. “One has to be done before the other. Obviously, you have to be a voter in order to get a detailed ballot, so that has to be processed first. And then your mail-in ballot application can be processed. We also file them all completely different.”

“In February, we have to send them an application for that calendar year,” Miller said. Then the voter must send it back, confirming they want to participate in mail-in voting for the year. The office files the mail-in applications alphabetically.

Between the May primary and the November general election, the county elections office fields a lot of calls from voters who want to verify they checked the mail-in ballot box or to check the address where the ballot will be sent.

Instead of going though something like 400,000 voter registration forms, it’s easier to go through 30,000 specific mail-in ballot forms.

The Department of State combined the documents and implemented the new form on Aug. 19, which was 13 weeks after the primary and just 11 weeks before the general election.

Now the county is processing the first half of the form—getting a person registered to vote—and then making a copy of the form to process the mail-in ballot portion and file that copy separately.

Voters have questions about the new form, too, Miller said. They are not sure if they are registering to vote or registering for mail-in voting, so it has taken some education.

“As election officials, we asked [the state] to wait until December. This is going to take voter education and explaining how the new form works,” Miller said. “There’s a big election coming up in November. I think everybody in Pennsylvania knows that. And all we wanted to do was wait until December to let us keep our offices going the way that they’re going. Not having to teach our staff new ways of doing things, and voters new ways of doing things. You know, keep things the same at least through November.”

Jonathan Marks, deputy secretary at the Pennsylvania Department of State, told The Philadelphia Inquirer the goal of the change is to simplify the process, so voters don’t have to fill out two forms.

The Epoch Times asked the Department of State why it didn’t wait until after the election cycle to change the form. The department did not respond by press time.

In addition to combining the voter registration and mail-in ballot applications, the state also changed the gender identification options on the forms.