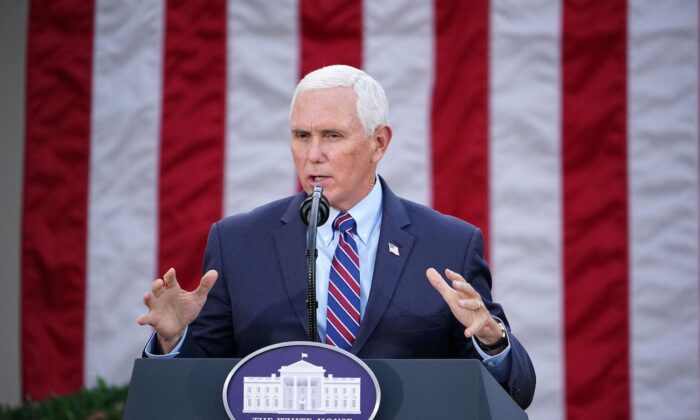 Pence Welcomes Efforts by Lawmakers to Object to Electoral College Votes on Jan. 6

Vice President Mike Pence said he welcomes efforts by lawmakers to challenge Electoral College results in the upcoming congressional joint session on Jan. 6, when the votes are formally counted, according to a new statement.

Chief of staff to the vice president Marc Short issued the statement to reporters on Saturday saying that Pence, who will be presiding over the Jan. 6 session as president of the senate, is open to considering planned objections by Republican House members and senators to Electoral College votes cast for Democratic presidential nominee Joe Biden.

Short added that the vice president also welcomes efforts by lawmakers to present evidence of election irregularities and voter fraud before Congress during that session.

“Vice President Pence shares the concerns of millions of Americans about voter fraud and irregularities in the last election,” Short said in the statement sent to media outlets.

This comes after a group of 11 Republican senators announced their intention to challenge the electoral college votes from contested states earlier on Saturday. The group, led by Sen. Ted Cruz (R-Texas), said the 2020 election “featured unprecedented allegations of voter fraud, violations, and lax enforcement of election law, and other voting irregularities.”

The allegations of fraud and irregularities in the 2020 election “exceed any in our lifetimes,” they said, adding that this “deep distrust” of U.S. democratic processes “will not magically disappear” and “should concern us all,” whether or not elected officials or journalist believe the allegations.

“It poses an ongoing threat to the legitimacy of any subsequent administrations,” the senators wrote in their statement while calling on Congress to appoint an electoral commission to conduct an emergency 10-day audit of the election results.

They added that they intend to object to the votes unless and until the emergency 10-day audit is completed.

Their announcement means 12 senators intend to object to the contested electoral votes on Jan. 6.

Sen. Josh Hawley (R-Mo.) earlier this week was the first senator to announce his plans to object. Forty-five House members plan on objecting to electoral votes, according to a tally by The Epoch Times.

Objections during the joint session must be made in writing by at least one House member and one senator. If the objection for any state meets this requirement, the joint session pauses and each house withdraws to its own chamber to debate the question for a maximum of two hours. The House and the Senate then vote separately to accept or reject the objection, which requires a majority vote from both chambers.

“Joe Biden will be inaugurated on January 20th, and no publicity stunt will change that,” Sen. Amy Klobuchar (D-Minn.) said in a statement.

“This pathetic, opportunistic stunt is an attack on our democracy. It’s un-American & unconscionable.” Sen. Richard Blumenthal (D-Conn.) said in a separate statement. “Votes have been counted, recounted, certified, & all challenges totally discredited. Time to govern & get things done.”

The Republican senators acknowledged in their statement on Saturday that they expect Democrats and a few Republicans to vote against them but added that “support for election integrity should not be a partisan issue.”

“A fair and credible audit—conducted expeditiously and completed well before January 20—would dramatically improve Americans’ faith in our electoral process and would significantly enhance the legitimacy of whoever becomes our next President. We owe that to the People,” the Republican senators said.

This comes after many allies of President Donald Trump called on Pence to reject electoral votes from disputed states. A judge on Friday rejected a lawsuit filed by Rep. Louie Gohmert (R-Texas) and other Republicans against Pence requesting that the court grant the vice president “the exclusive authority and sole discretion in determining which electoral votes to count for a given State” on Jan. 6.