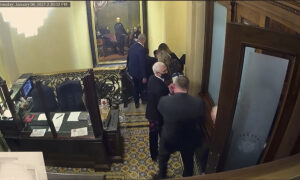 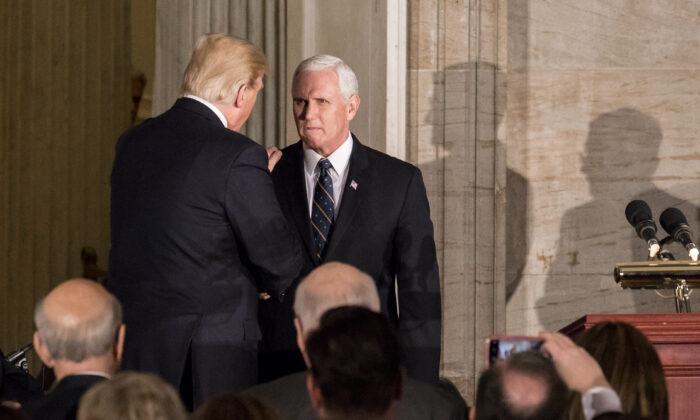 Former Vice President Mike Pence praised former President Donald Trump during a meeting with congressional Republicans this week, according to one of the lawmakers present.

“Vice President Pence made it very clear that he’s proud of the Trump administration’s accomplishments and he spoke favorable of President Trump and their relationship,” Rep. Jim Banks (R-Ind.) told The Epoch Times in an emailed statement.

“As a former Chairman of the Republican Study Committee himself, VP Pence gave a lot of great advice about my position. It was an honor to work with him to develop the RSC’s forward-facing conservative agenda to unite the Republican Party,” he added.

“I got the sense they speak often and maintain the same personal friendship and relationship now that they have for four years,” he added to CNN.

Banks said a group from his Republican Study Committee convened with Pence in the Washington region at the fellow Indianan’s transition office.

They discussed the way forward for the GOP while also speaking about what the party accomplished in the past.

Banks believes Pence will have a more public presence in the coming months, after speaking little since he and Trump left office last month.

“The president thanked the vice president for his service, told him he did a great job, and they’ve even had conservsations since then, including even this week,” Marc Short, the former aide, said during an appearance on Fox News.

Trump and Pence accomplished a lot together, “and they should be proud about that,” Short added.

Pence is not planning to appear at the popular Conservative Political Action Conference this week, a departure from previous years. The director of the conference called it “a mistake.”

One report alleged Trump wouldn’t speak to the event if Pence didn’t attend, but a spokesman for the former president said the report was “patently false,” noting it relied on anonymous sources.

Questions about the relationship between the former running mates arose last month, when they diverged on how to handle counting electoral votes during a joint session of Congress.

Trump, who continues to insist he won the 2020 election, wanted Pence to intervene during the session when votes from some states were brought up, because of laws declared unconstitutional by courts, or measures alleged to be unconstitutional, or allegations of voter or election fraud.

Pence declined, saying he thought the Constitution constrained him from intervening as such in his role as president of the Senate.